The Real Job of a Writer

As a writer, I sometimes forget what my real job is. When I’m rushed or under a deadline, it’s easy to be fooled into thinking my job is to string words together in some creative way resulting in a variety of desired outcomes for me or the reader. Hopefully both. 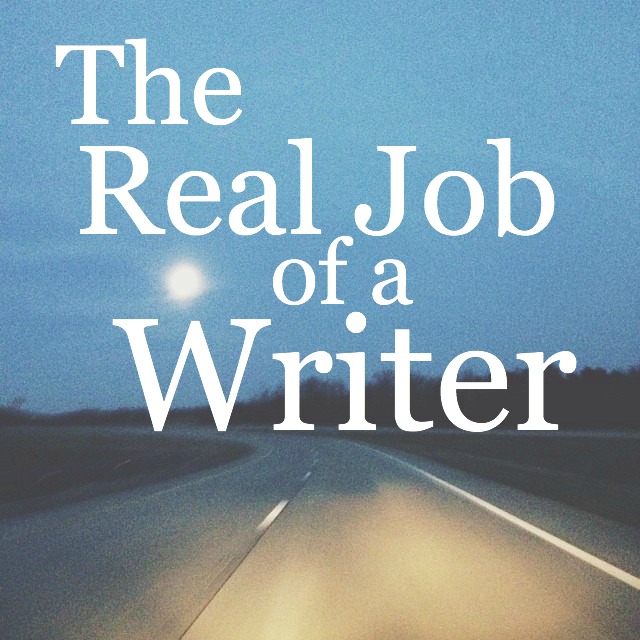 Obviously a writer has to actually write. But my job, even before writing, is to pay attention.

Listening with all my senses is my first real job. When I remember nothing begins with me and purpose to stay small in the presence of others (not in a woe-is-me kind of way, but in a you-have-something-to-teach-me way), the writing not only comes more naturally, but is more full and textured.

This listening posture is a lifestyle, not a decision I make because I have a deadline coming up.

Pay Attention to the World Around Me

There are different ways of listening. First, I pay attention to the world around me. My brain is now trained to listen for certain concepts and perspectives no matter where I am or what I’m doing. If I hear something true about faith, grace, or creativity, it’s going to catch my attention and inform my own thinking by either confirming what I already believe or challenging me to see things differently.

On my way down to Charlotte this weekend, I listened to Here’s the Thing, a podcast with Alec Baldwin. On this episode, Alec Baldwin interviews Lorne Michaels, creator of Saturday Night Live and the man responsible for launching the careers of Tina Fey, Chris Farley, Will Farrell, Bill Murray and way too many others for me to list out.

From episode 8 of Here’s the Thing with Alec Baldwin, orginally aired January 30, 2012:

Lorne Michaels: Well, I did with “Kids in the Hall” and I did now with Fred in “Portlandia” which is on IFC.

Alec Baldwin: Do you feel you haven’t been as aggressive in cable as you might have been?

Lorne Michaels: I think at the end of the day…

Lorne Michaels: Yes, to me, there’s no creativity without boundaries. If you’re gonna write a sonnet, it’s fourteen lines. So it’s solving the problem within the container. I think for me, commercial television and those boundaries, I like it. I like that you can’t use certain language. I like that you have to be bright enough to figure out how to get your ideas across in that amount of time with intellegience being the thing that you hope is showing. Not officially, but you want it to be, “Oh, that was kind of bright.”

After hearing him say this – There’s no creativity without boundaries – I paused the podcast, made a note in my phone voice recorder, and continued to listen. I agree wholeheartedly with Lorne Michaels on this point, something I’ve written about here on the blog and in A Million Little Ways.

I’ve thought a lot about this concept so my ear is now trained to notice it. When I hear it again from different perspectives, I write it down.

Pay Attention to the World Within Me

But there is another way of listening, a way I am sometimes loath to practice. As a writer, I take seriously the job of  listening to my own life. I don’t always like what I hear which is why this kind of listening is more difficult than the first.

The very thing Lorne Michaels pointed out in that interview, the concept about creativity I agree with and have written about myself, is the reality I slam up against in my own writing and life.

I face the limiting factors of insecurity, fatigue, doubt, pressure, and time. For example, today I have to work within the practical limit that it’s March 18 and our kids are out of school again because of icy roads. And I want to point to the external limit and say that there is what is keeping me from being creative today. When really, the lack of a consistent writing schedule lately is forcing me to be creative. Not necessarily in my work, but in my life.

How will I decide to spend these extra unexpected days? How will I handle the unplanned? How will I respond when the schedule doesn’t allow for me to do what I hoped and wanted to do? The easy, uninspired way is to be frustrated. This takes zero creativity. But the real challenge for me is to walk into this day with new eyes – to decide to see, handle, and face the ordinary in a different kind of way.

But feel discouraged in my living and it gets tougher to pep-talk me out of. Especially when my living is keeping me from my writing. See how twisted this can get?

This is when living is art is living.

Paying attention is the writer’s real job – in my world and in my life. Otherwise, the writing will be empty and meaningless.