When I found out John’s dad was born in 1939, the first thing I thought was, “Oh, he was born the same year The Wizard of Oz released in theaters” because I only remember the important parts of history. 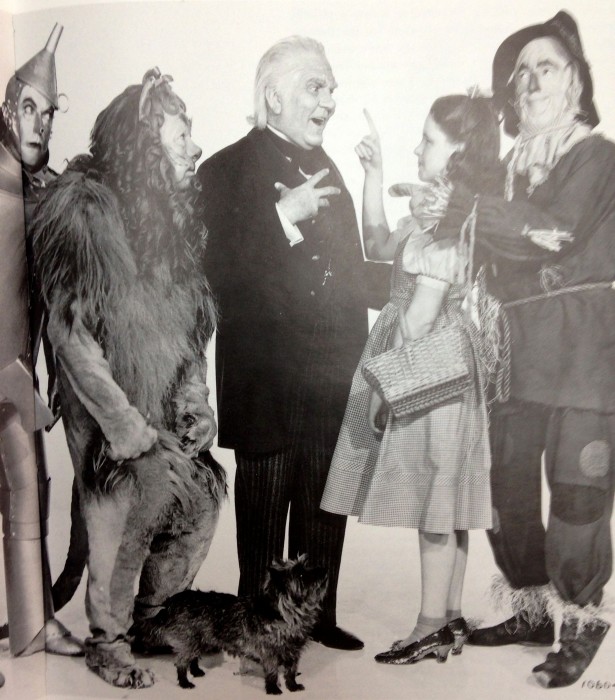 book that I own, love and cherish.

Seriously though, it’s no secret here that The Wizard of Oz is one of my favorite all time movies. In the Life section of yesterday’s paper, there was a huge photo of Judy Garland as Dorothy and John saved it out just for me. I read the article in its entirety for the kids while they ate breakfast because history. I should totally homeschool.

I would be lying if I said my main motivation for watching the Oscars last night wasn’t to see how they would honor the 75th anniversary of the movie. I mean yes, star-studded audience and nominees and musical scores and Best Picture and all that. But The Wizard of Oz! When Ellen didn’t come out first thing wearing ruby slippers, I realized I might need to lower my expectations.

And then I saw Liza Minelli in the audience and I started to really worry. Because if they think pointing to Liza Minelli and saying Look, Judy Garland’s daughter is here! Happy Birthday, Wizard! is going to cut it for a “celebration” they may as well just shut it all down. This will not do.

After way too long into the evening, the orchestra started to play a familiar Oz tune and my heart started to pound in anticipation. And then Whoopi came out and I saw her red shoes right away and I started to nervous-twirl my hair. She gave a short tribute to the movie which I didn’t hear because I was staring at her feet. And even though she was wearing striped tights like the Wicked Witch, I forgave that poor wardrobe choice because she said this:

And that’s when the lights dimmed and out comes Pink wearing a ruby dress. Pink! In a ruby dress! I didn’t take any photos of my TV because I was mesmorized by all the ruby and I would share an image with you here but I’d have to swipe it from the internet and I’m afraid Getty will sue me.

You can watch the video here if you missed it. And if you have any love at all for Dorothy and the Wizard, you’ll want to because they show a montage in the background while Pink sings Over the Rainbow and you are dead inside if you aren’t moved. I thought she did a beautiful job even though she made some strange breath choices during the song and she could have used a cami under that lovely dress, but that didn’t stop me from tearing up and loving every minute of it. And when Ellen came out dressed as Glinda after the commercial break, well. It was a drop the mic moment for me.

Thank you for this Vine, People Magazine.

Obviously this Oscar re-cap is not complete, as I bascially haven’t mentioned any of the movies that were nominated (or made in the last 74 years for that matter) or any of the beautiful red carpet people like Lupita (fierce Tinkerbell) or Jennifer Lawrence (beautiful awkward genius).

This concludes my Oz indulgence. I will return to our typical soul-breathing posts in a few days. Meanwhile, (which I always used to think was meanwild) if you want to read a legit Oscar recap, might I suggest this post from Kendra Adachi? Because it’s fantastic.

Did you watch the Oscars? What did you think of Pink?! I mean, the Oscars?