why you need to tell someone how scared you are

The pool opened this weekend so the air smells like burgers and coconut sunscreen. I spent the weekend fully clothed in my lounge chair – most days it was too cold for me to swim. But it’s never too cold to people-watch and one of my favorite places to do that at the pool is down by the diving boards. 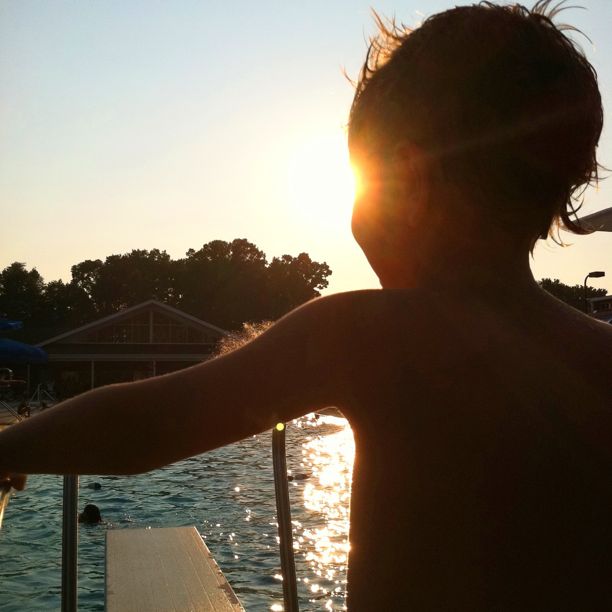 I watched my son fly off the low-dive, swim to the ladder, walk fast back to the diving board line and fly off the end of the board again. He doesn’t even think about it.

But that isn’t the case for some. While he made his rounds on the low dive, I noticed a little girl – maybe 8 or 9 – standing at the end of the high dive. She wasn’t jumping.

Instead, she stood there looking around for another way down. She bent her knees like she was preparing, but quickly stood up straight again.

After a few tries like this, other people began to notice her and it wasn’t long before all eyes were on her. Her dad appeared from the crowd shouting encouragement and waving a thumbs up.

Someone started to clap. Soon, everyone was clapping, cheering her on. We could tell she desperately wanted to jump, but I heard her say faintly, “It’s too high.

She couldn’t do it and slowly climbed backwards down the ladder.

Ten minutes later, I saw her climb back up. I nudged John next to me, “Look! There she is again.”

She seemed more determined this time, standing on the edge. She bent her knees same as last time. And again, she straightened back up. 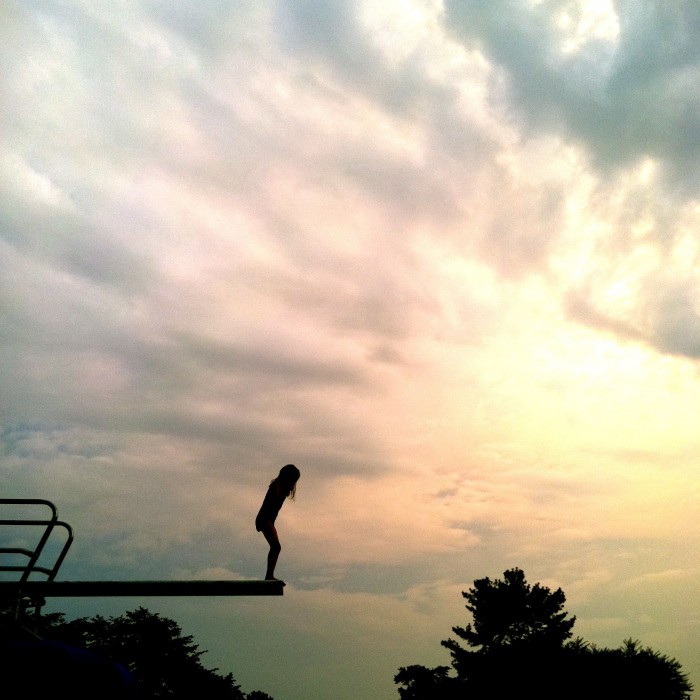 The crowd began to clap again, this time with more energy. Several people from across the pool started a countdown – 3 . . 2 . . 1 . . and with one slow motion crouch, she flung herself from the end of the board, arms straight above her.

As she fell, we all whooped and hollered, our collective happiness coming from a genuine excitement for her. I know she heard us before she hit the water.

Here’s the thing: kids jump off that board every 30 seconds and nobody cares. They turn flips and touch their toes and they do it 10 times in a row.

But it isn’t until someone hesitates that the crowd gets involved, even a crowd of strangers.

With a little more than a month left in the only job John and I have ever known as a couple, I feel like we are not only standing at the end of a diving board, we’ve decided to go ahead and set up a tent there on the edge.

Last week I spent some time with the other pastor’s wives at our church. They were kind to gather in the midst of a busy month to spend some time with me and say goodbye. As we sat around the table eating pimento cheese spread on crackers and a delicious chocolate cake with my name on it, I cried as I shared with them my excitement as well as my fear.

They prayed for me, and in a very real way, I felt like I was standing scared at the edge of the diving board. But I had a profound awareness that for those moments, these women were a tiny crowd around me, encouraging me to jump.

If I hadn’t told them I was afraid, they may not have known to cheer.

Now before you get the wrong idea, I want you to know something about this group of women – these other wives and I are not best friends. We don’t have Bible study together or go on vacation with each other’s families. I like them, I respect them, I love to spend time with them. But we hardly ever see one another and it honestly would have been easier and more comfortable for me to not let them see me cry.

After that evening with them, I reminded myself of this: Don’t insist your encouragement should come from a particular person or group of people. Be open to receiving God however (and through whomever) he may want to show himself.

Sometimes it’s good to let them see you sweat even when it feels awkward. Fear seems to grow in the darkness of isolation. But when you expose it in the light of community, it tends to lose power. Sharing my fear is often the path that leads to courage.

So here’s to climbing up on top of diving boards and being honest about how terrified we are. May you push through your insecurity and fully admit your fear. And may you be open to receiving the kind community of people there waiting to cheer you on.