What a Parent Does

They both need white collared shirts for their chorus performance this week. It sounds easy enough, but as it turns out there aren’t a lot of stores selling plain, white, button-up collared shirts for girls. They all have ruffles or rhinestones or characters on the front. And hardly any of them are white. 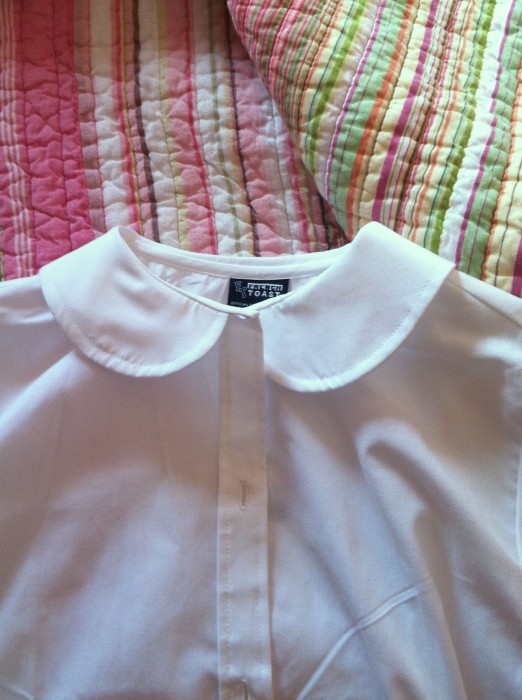 Today I don’t mind the hunt. It reminds me I’m their mom, and I do things like find them shirts for their chorus concert.

I give up on shopping in the girls section at Target and move over to the womens. I train my eyes to ignore every color but white and quickly find a rack in the middle with white, button-up shirts. With collars. There is only one extra-small so I grab it, knowing I’m only half done.

I end up at Once Upon a Child to find another white blouse for my other girl. I don’t come in here as often as I did when the kids were younger. I smile as I walk in, remembering how John always accidentally calls one of the shows we watch Once Upon a Child instead of it’s actual name, Once Upon a Time.

I head to the back where the clothes are color coordinated. Score. This shouldn’t take long.

They only have three white blouses in the girls’ size, one with ruffles in the front (won’t work), one labeled size 10 but looks more like a 4 (way too small) and finally another that looks the right size but has a rounded collar. I decide it will work and head to check out.

As the cashier rings me up, she tells me all about how the store works and I let her because why not.

“You can bring in any gently used clothes she’s outgrown and we will buy them from you. We accept all seasons.”

I thank her, knowing she speaks lies and more lies because she makes it sound so simple but they are actually very picky about the clothes they will accept. Ask me how I know. Needless to say, I won’t be bringing in any clothes she has outgrown anymore.

And besides, I have two she’s. Not that the cashier should have known that, but I notice when she says it. In our house, it’s never just one daughter. It’s always two.

When I first found out we were having twins, I was aware of the potential resentment one of them might experience because of being a twin. (I like to make up problems before they happen because I am a rational person.)

I’m reminded of something John Blase wrote about the importance of simply being present with our kids:

“Presence. I realize it’s a counterintuitive idea for most parents these days but I like to suggest that simply being there is as important as what you do when you’re there. The cultural pressure to be this fully engaged father reminds me of that picture of Atlas carrying the world on his shoulders; that’s a little much, don’tcha think? Maybe one of the primary roles of the father in a child’s life is to be there, on-site, in the scene, to keep the fear at bay. Not to interfere, but to protect simply by presence.”

from his book, Know When to Hold ‘Em

Walking to the car with my second white blouse, the wind picks up as I open the door. I’ll head to the school to have lunch with them after this, where they’ll each pick a friend. We’ll sit in our little group of five at the family table, sharing the kit-kats I bought at Target and they will  ignore me completely while they giggle with their friends.