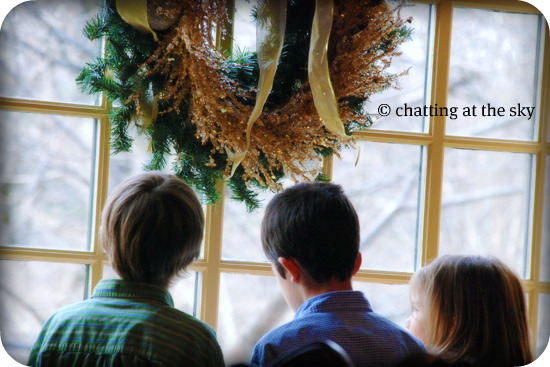 Even though she has been told he isn’t real and even though the boys are too old to believe in him anyway, they ran to the window as the waitress announced that Santa would be leaving soon. Where is his sleigh? we hear the small skeptics say; a dare rather than a genuine question.

Still, there they stood, as if waiting for him to hail a cab while at the same time, hoping to see some shred of proof that they were wrong. They know the truth. They are looking for loopholes, just as skeptics ought to do. Unexpectedly, I see a gift in their halfhearted waiting. I see a glimpse of Advent.

Rather than wait for something we know will never come, we wait to celebrate One who has come already. Rather than roll our eyes and scoff at a fake magic maker who fails to deliver, we stand in awe of our Maker and Deliverer. God with us, for us, in us. What a gift.