For All the Sad Americans Who Missed the Total Eclipse

It started with Halley’s comet, it must have.

It was 1986 and Mom and her friend Irene took me and my sister out to the field beside our Indiana church in the middle of the night. I only remember the cold and the darkness. The comet, if I even actually saw it, was underwhelming.

But it didn’t matter. The grown ups said this was a big deal and I believed them.

I’ve been believing them ever since.

When my sister told me about the total eclipse a while back, I started to make plans to get myself into The Path of Totality because of course. We live about a three hour drive from both Columbia and Greenville, South Carolina, two cities directly in the path.

Of course I was going to drive to see this. I’ve driven for less than this.

I’ll drive out of our tree-filled neighborhood at bedtime on the night of a full moon just to catch a glimpse.

I drove around Santa Barbara in the dark every morning for four days while visiting just to see the sun rise over and over again.

When we go to the beach every summer, John and I wake up before dawn so we can drag our beach chairs through the sand and watch the sun rise up over the water, the regular sun on her regular path.

My family knows if the sun is setting or the moon is rising, it’s fair game that I might pull over to the roadside to catch a glimpse or a photo.

When the moon is blood, strawberry, full or crescent, I want to see it and am always delighted by it.

Summer and winter solstice are my twin muses, the longest day and the shortest day ushering me into reflection with their shadows and light.

When the space station flies over our cul-de-sac, we track it.

If we’re in a dark part of town, I look up to see the stars.

My blog for years was called Chatting at the Sky. Annoying, but also telling.

For a woman who so loves the sky, I’ve still never seen the Milky Way, the Northern Lights, or a total solar eclipse.

This was my chance.

But it wasn’t to be.

A weekend of travel and a Monday night school open house left little room for our family to drive six hours in one day and make it back in time. There was much conversation around this. There may have been tears on my end. I may have reverted back to being a child and stomping my feet.

I may not have. You’ll never know.

I made my precarious peace with it and on the day of the eclipse, we headed out to a local field to take in the 94 percent partial eclipse we would get in our own hometown.

Not the same, but something.

“Seeing a partial eclipse bears the same relation to seeing a total eclipse as kissing a man does to marrying him, or as flying in an airplane does to falling out of an airplane.

Although the one experience precedes the other, it in no way prepares you for it. During a partial eclipse the sky does not darken—not even when 94 percent of the sun is hidden.”

This I know for sure.

Still we headed out and pitched our chairs.

But when the clouds rolled in just before the eclipse started and the rain began to fall, my heart sank all the way down. The total eclipse was already lost to me and now we wouldn’t even get a partial?

I convinced my family to jump in the car and head south. Follow that patch of blue sky! With my sister-in-law and her family behind us and another friend and her daughter behind them, we rode down the highway three cars deep in the yellow, fading light.

Ten minutes out of town, we made it to sunlight, pulled over in a gas station parking lot and yanked out our glasses.

During a partial solar eclipse back in tenth grade, our Spanish teacher let us go outside but warned us to not dare look up, so this was my first time seeing an eclipse with my own eyes through glasses.

And still, it was surprising to see. Oh, they’re right. It really is happening.

We shared our glasses and squeals of delight, and decided to find a better place to watch the whole thing. We hopped back in the cars and found a patch of sunny grass a bit down the road, a line of cars already stopped, all eyes trained on the sky.

Just as it should be. 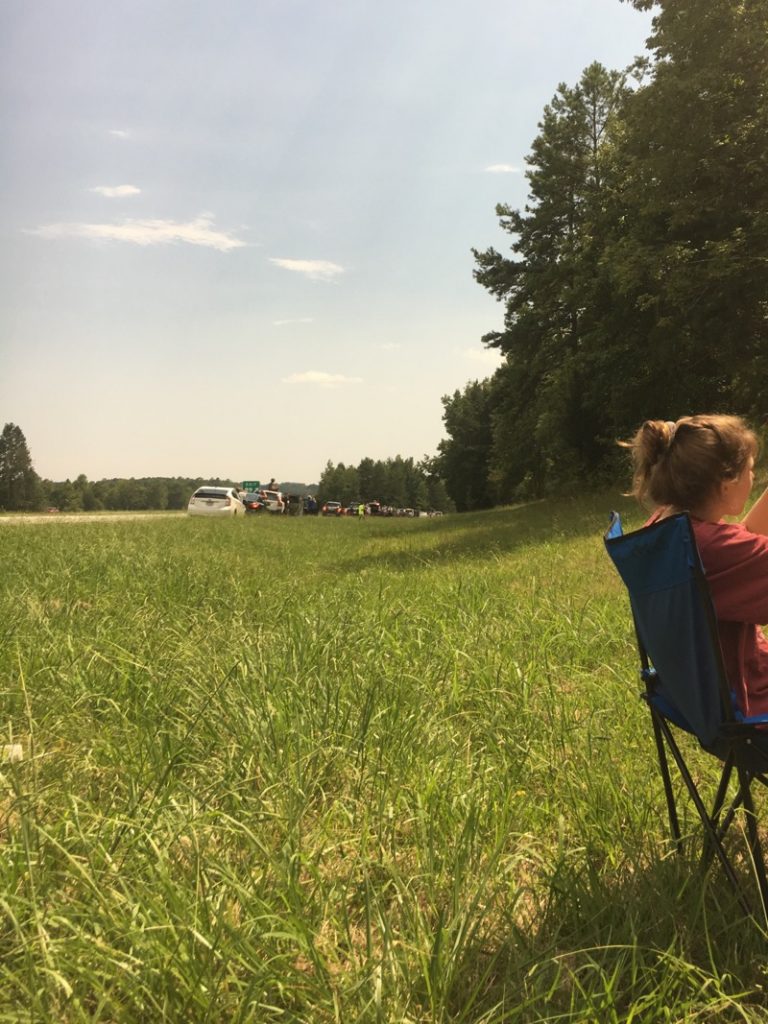 Watching the whole thing unfold was a gift.

And even though it never got dark, it did get dim, a yellow I’ve not quite seen before. We felt the temperature drop and kept blinking our eyes, adjusting to the strange light spilling onto the world.

The darkening was only gradual for those of us standing beneath the 94% partial eclipse. And that was all we got – a gradual dimness giving way to a gradual light.

This time, we take the show we got. And though it wasn’t totality, it still happened.

I try to imagine in my mind what it was like for those of you in the path of totality, close my eyes and try to give life to what I’ve read and the photos I’ve seen.

I’ve watched countless videos online, but everyone says there’s no way to capture it with a camera. I know you have to be there to know what it’s like and I kind of love that about it.

Turns out God still makes things we can’t capture on Instagram. How about that?

Watching one of Sarah Jessica Parker’s instagram videos (one of my favorites so far – there are three so watch them all) you can hear her say just after totality, “Oh this is so humbling.”

Because even if we weren’t able to see it with our very own two eyes, just the fact that it happens at all is a humbling experience.

There was no delay and no hurry.

There was no celebrity who could outshine it, no amount of money that could control it, no power that could stop it, and no politician who could take credit for it.

No one could vote for or against.

We could only bear witness.

For a few hours on a Monday in August, that’s what we did here in the United States and I just loved it. But I have to admit, I’m sad to have missed the total eclipse.

It feels silly and childish to admit, but there it is.

For me this week, the disappointment is real, but the deeper question is why. It’s one thing to admit when we feel let down, but it’s another to let our disappointment lead us to our center and enter further fellowship with God.

I’m learning not to discount or throw away those times when I feel left out or let down. So I took some time this week to consider the question beneath the question.

For those of you into personality typing systems, I’m an enneagram four and an INFJ on the Meyers-Briggs, so I live in a world full of meaning, connection, and possibility. I pay attention and intuit what’s going on beneath the surface of things. I value beauty and wonder and at my best, I have the ability to take an experience and put it into language the soul can understand, process, and apply.

But the shadow side of all of that goodness is I also have a tendency to be dramatic, self-obsessed, full of shame, and a stubborn belief in the false narrative in my head that I’m missing something vital I need for life.

And worse, everyone else has it.

And oh yeah, they’re all in on the secret and I’m the punchline.

It’s dark and weird and self-indlugent, but missing that path of totality somehow touched on that for me. As I’ve thought about it, I realize that creation is one way I experience God and understand life. And missing that cool experience felt a bit like God passed by in the world and I was on the wrong end of I-85.

That isn’t true, of course. But that’s where the disappointment comes from. Creation and all of the mysterious beauty within it is life-giving. While it isn’t healthy to demand all our experiences be life-giving, it’s important to pay attention to them when we recognize them. I don’t think we do that enough. 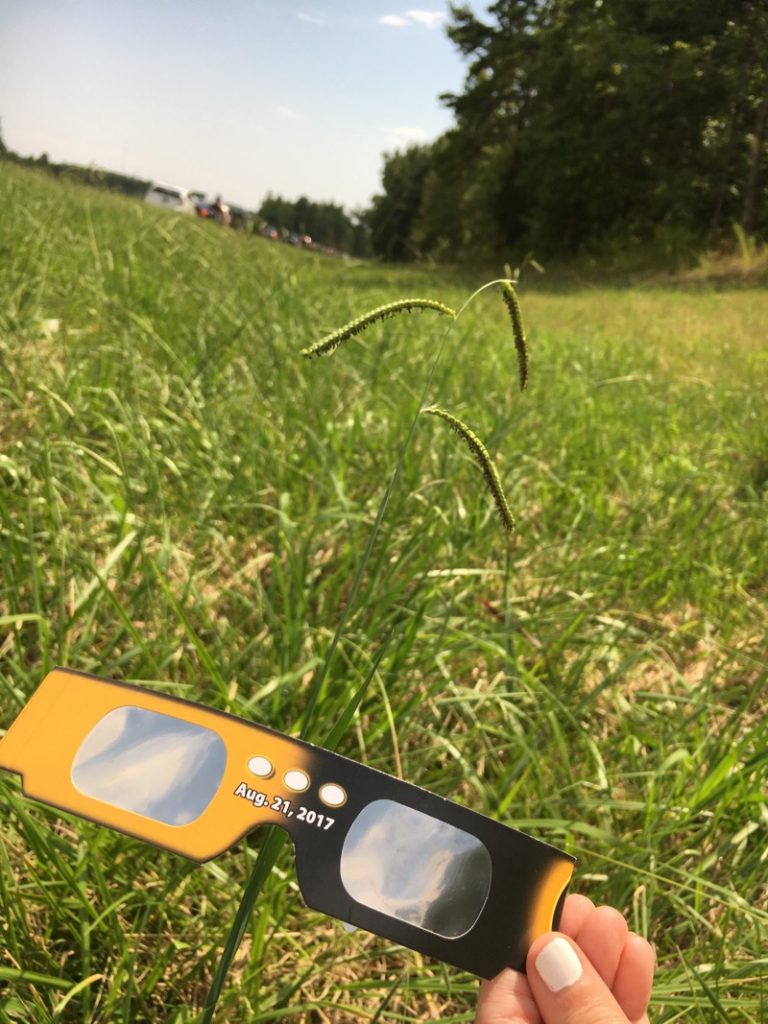 But here’s something I’m loving: watching all the videos online of people who were in the path. I cannot get enough! It touches me to my core to see everyone respond the same way no matter your gender, age, race or status.

If you’re feeling a little sad over missing the total eclipse, it could help to ask yourself why.

As for me, I’ve been reminded that God is with me, even in this small disappointment. He’s always inviting us deeper in and further on, willing to let even the silliest things draw us closer to him.

And while I’ve always known I love the sky and the light and shadows that dance above us everyday, now I’m taking it all a bit more to heart, making a list of things I’d still like to see simply because they bring me joy.

Next time our country experiences a total eclipse, I’m planning to get myself and my people to the path of totality. We’ll save our approved glasses, take our colanders to look at the shadow bands in dappled light, and hope for a clear day in Indiana in April 2024.

Want help to discern what is life-giving in your own life?

This week’s episode of my podcast The Next Right Thing could help you do just that.

Listen in to “Make the Most Important List” right here or download a transcript of the episode.