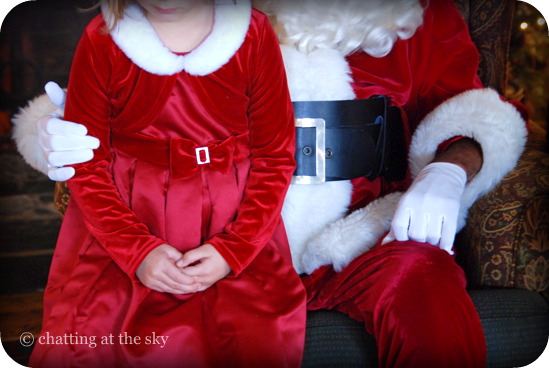 Growing up, Mom told us Santa was a game everyone played at Christmas. She said It’s okay to pretend, but really Christmas is about Jesus. And that was that. Then she would warn us not to talk about it in front of the other kids because we might ruin the game for them. I kept that secret under lock and key, even as I listened to friends debate his existence on cold, Indiana playgrounds and worn out tire swings.

Still, I watched. And on Christmas Eve, I kinda sorta tried to hear sleigh bells.

We tell our children a similar version of the same thing. But it doesn’t seem to matter what we say. They still kinda sorta think maybe he might be real a little bit. I think that’s okay. I want them to own what they believe in life, even in the small things. So I tell them Bible stories, put out the nativity, answer their questions in truth and love. And I let them watch Rudolph. It’s a hodge-podge of re-living my own childhood Christmas memories as well as learning what it means to make new and meaningful ones for them.

I’m glad for these early introductions to their other-than-me-ness. I’m thankful for this innocent opportunity to talk about faith, choice and belief. In all of this, I learn again that I can’t control my kids. I can’t make them believe or not believe anything just because I say it. I have responsibilites to teach just as they have choices to make. They are little God image-bearers,  created to choose love and life. Because eventhough they are only in kindergarten, their growing choices will have real consequences, more than just staying up too late on Christmas Eve to hear reindeer hooves.