to be or not to be

Every cartoon should have two equally pretty, equally important, equally nice female characters. That way, my twin girls wouldn’t fight over who gets to be Madeleine or Cinderella.

As the theme song to Clifford began the other day, one of the twins declared “I’m Emily Elizabeth!” in a sing-song, victorious kind of way. Of course, the other twin began to pout and stomp her foot declaring, “You ALWAYS get to be her!”

What’s the big deal? I thought to myself. So I said, “You can both be Emily Elizabeth.” Wrong solution, Mommy. More drama. Much complaining. Ridiculous, thought I.

And then, it all came back to me. 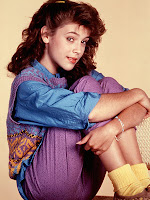 ght in the mid-80’s. ABC’s Tuesday night lineup is only a few hours from airing: Who’s the Boss, Growing Pains and Moonlighting. All of a sudden, my sister blurts out the all-coveted phrase: “I’m Alyssa! I’m Maddie! I’m Carol!” And just like the rules of shot-gun, whoever called it, got it. I’m not sure why we called Alyssa Milano by her real name and the other two by their character names. Still, the phrase was important. The winner watched in victory, the loser destined to imagine herself as Mona or Maggie or worse, Miss DiPesto.

So maybe my girls aren’t so unreasonable after all. This memory helped me to empathize with their cause, their need to project themselves into the make-believe world of another. And their need to stand in the shoes of the heroine alone, without a measly sister sharing the spotlight.