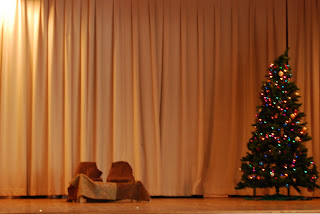 It would have been a silent, holy night. That is, until Joseph threw up and Mary got a fever.

The girls had their Christmas play at preschool yesterday. (I use the word ‘play’ very loosely in this context…imagine it to be a verb rather than a noun). It was fun to watch as long as you remember that the actors are not even as old as the baking soda in the back of my fridge…way too old for baking soda, not so old for people.

So even though the cast was young and inexperienced, all the nativity characters were accounted for: a too-tall-for-her-age Mary; a small, red-headed Joseph; a donkey who walked on his hind legs. I spent the first 3 minutes of the play trying to figure out why Joseph had construction paper ears and who is that red-headed kid supposed to be? Jesus? Then the teacher motioned for the donkey to crawl and the scene became much more familiar.

My girls were the angels and there were sheep and 3 wise men and an inn keeper (the only one with actual lines). As chaotic as it was, I felt myself relax and watch the story retold through these little ones. It was enjoyable. The girls even posed for a photo after the show in their intricately designed costumes with their friend, Julia. 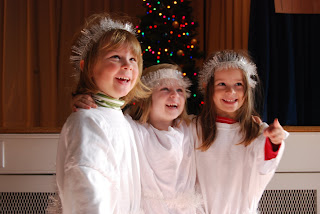 It wasn’t until we were sitting down after the performance, eating our cookies with red punch when I heard it, the words that historically send me into a tailspin of anxiety and a strong tendency to overuse hand sanitizer: Joseph just threw up over there…and Mary has a fever. I immediately put down my punch that had mysteriously begun to taste like bile flavored kool-aid. One glance at The Man: We gotta get outta here. Quick.

And that’s just what we did.