the merry old land of oz 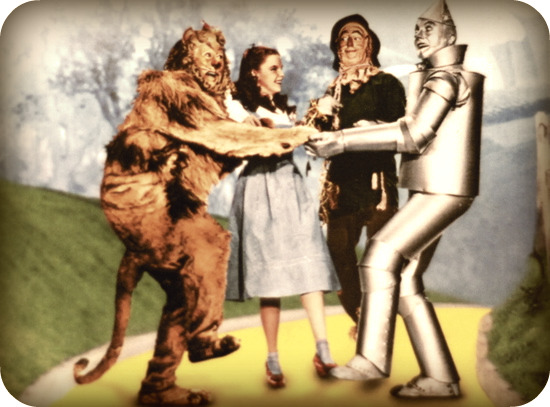 It feels cliche to love it this much. It’s such an obvious choice for a favorite childhood movie. But I can’t help it. It isn’t even like I ever read the books. If I’m honest, it all started because of Dorothy. I thought she was the most beautiful girl I had ever seen.  Years later when I heard her described as ‘chubby’ in commentaries about the movie, I was so confused. Chubby? Hardly. To me, she was perfect.

I’ve seen the movie countless times, to the point where I not only know nearly every line, I also know hand movements and head tilts. I own the collectors edition hardback copy of the script. I can sing the scene in Munchkin Land from the Coroner to the Lollipop Guild. I know how to spot nearly all of the many goofs and bloopers, like how Dorothy’s pigtails change from scene to scene and how props reappear in the wrong places.

I love reading about the making of the movie, like how the Wicked Witch of the West was originally scripted to be glamorous and beautiful since Snow White and the Seven Dwarfs, a movie that was so successful the year before, had a glamorous evil Queen. Or how “Over the Rainbow” was almost permanently cut because it was too long and they thought it was degrading for Dorothy to sing in a barnyard.

It was 1939 when The Wizard of Oz was released on the big screen. Now, we have a chance to see it in the theater for a special one night only 70th anniversary event this Wednesday, September 23. Find out if your city is showing the movie in the theater. And then be sure to tell me all about it, because unfortunately, mine is not.