And when it ends and comes on again, I watch the first half that I missed. And then I google “Bring It On” because I can’t remember what’s-her-name’s name who plays the captain. Then I write some more. Cry. Delete. Google.

Why this crazed, insecure, distracted grasping for words?

Because two weeks ago, I signed a contract to write two books for Baker Revell. Apparently there is nothing like a two-book deal to make me overwhelmingly unproductive. 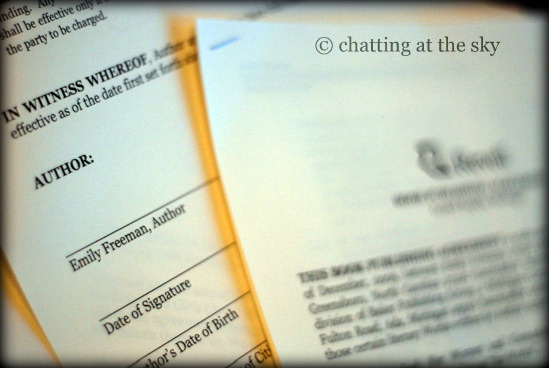 And now you know.

It isn’t a memoir, but I can’t write this book without telling my story. And maybe yours, too, if you’re willing to share it. The proposal I pitched was for a book for high school girls, as many of you already know. Turns out they wanted that one and they asked if I would be open to writing one for grown up girls as well. Both are about living life from a place of freedom and rest rather than from behind that worn-out paper face we have convinced ourselves is really us.

There’s more, of course, but for now, I just wanted to share the news with you. My first manuscript is due in August and the book will be released in the summer of 2011. The second book will come out in 2012. I’m really excited. And humbled. And terrified. It is also surprising to me how the elation I thought would come with a book deal has completely alluded me. Instead, I sit between signing a contract and a manuscript deadline with a shiny new set of fears and insecurities that I never knew would exist this side of the dotted line.

I hear vague Jesus-whispers in the background: Live the truth you say you believe. My girl heart freaks out and wants to hide. His voice is kind and inviting, and I consider it a great privilege that He loves me enough to let me be a part of what He is doing. Because it isn’t about a book or a deal or a publisher. It is about truth. In the midst of my fears that perhaps I’m not smart enough or poetic enough or brave enough to write non-fiction that matters, I know that He is present and active. And I know this isn’t about me.

It has felt like a long process, but in the world of book publishing it’s actually happened unusually fast. If you are interested in knowing more of the nuts and bolts of proposal writing or the publishing process, I would be happy to direct you to the resources that helped me so far. Thank you for being such an encouraging, safe group of people with whom I can share this journey.