So I just posted about one twin…and now I’m feeling guilty for not posting about the other. See how that works? And I wonder why I can never give them one-on-one attention. Because it isn’t FAIR! (A word I have come to hate, by the way. How did they learn that word, anyway? Certainly not from me). But in this case, it just doesn’t seem right to talk of one and not the other. So if you stop reading now because you’re having my-kids-overload, I’ll understand.

Still here? Then let me introduce you to twin B: 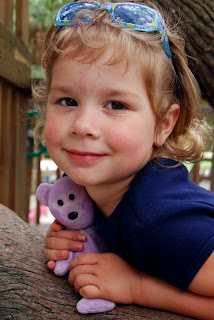 When we found out I was pregnant, it was a great day as we had been trying for over 6 months and then, there it was. Two lines. (Actually, 6 lines…I took 3 tests just to be sure.) Then I started getting really, grossly sick. Then I found out there were 2 kids growing in there. Then I had a nervous breakdown. Not really, but almost.

The doctors guessed our twins were identical from what they could tell in the ultrasounds (I’ll spare you the details about placentas). But when they were born, they were different from the start. We needed no DNA test to tell us the obvious: these girls were fraternal. And so it began.

While I always thought of her sister as an older woman in a baby’s body, this one was a genuine rosy-cheeked, bright-eyed ball of baby. She laughed hard, cried hard, slept hard and played hard. And she still does. It often seems as though the party doesn’t start until she arrives. She loves football almost as much as helping me cook. She idolizes her older boy cousins. She is responsible, sensitive, funny and a sucker for chocolate. She likes the fact that her name has 2 L’s. She is the spitting image of my mother-in-law.

As I think of her growing up into a young woman, I imagine she and I will get along well. Maybe that’s because I don’t see much of myself in her. She will be a compassionate, life-loving grown up. And though I’m not a fan of that I Love you Forever book (you know, the one where the grown man’s mom sneaks into his house at night to hold him like she did when he was a baby…creepy), I can kind of relate to the sentiment. She is the best snuggler in the house. I know I will miss that one day.