Why Mister Rogers was an Artist Who Influences 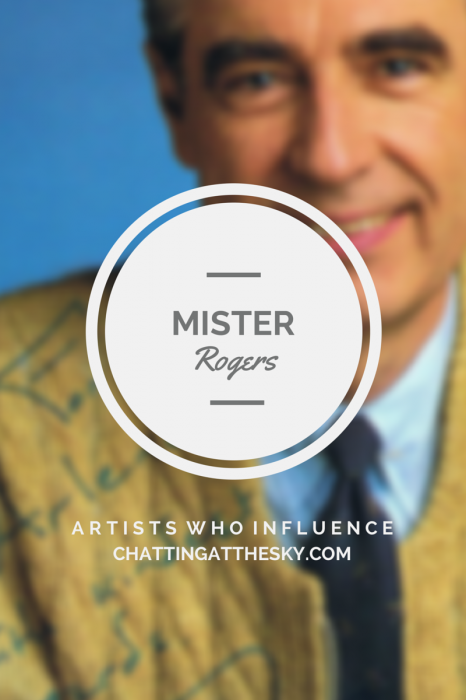 If my childhood were a living room, Mister Rogers’ Neighborhood would be on the TV. I simply can’t imagine growing up without Lady Aberlin, King Friday, Prince Tuesday, and the Neighborhood of Make-Believe.

But of course the main draw was Mister Rogers himself. It felt like home to watch him put on his tennis shoes, to have him sing, It’s such a good feeling, to know you’re a live it’s such a happy feeling you’re growing inside! When he said I was special, I believed him.

Back then, though, I didn’t know much about the man Mister Rogers. I just knew I didn’t want to miss his show. The best way to illustrate how he truly was an artist who influenced is to share about two videos I saw within an hour of each other.

Around this time last year, Martha Stewart had an interview with Stephanie Ruhle of Bloomberg Television where she was asked about the brands she trusts and who she thinks has good taste. Then the subject turned to her opinions on social media.

“Who are these bloggers? They’re not trained editors at Vogue magazine. I mean there are bloggers writing recipes that aren’t tested, that aren’t necessarily very good, or are copies of everything that really good editors have created and done. So bloggers create a kind of popularity, but they are not the experts. And we have to understand that.”

Then I watched another video.

It was Mr. Rogers, and he was being presented with a lifetime achievement award. I’ve included the video here in this post, but I’ll transcribe part of it for you below:

“So many people have helped me to come to this night. Some of you are here. Some are far away. Some are even in heaven. All of us have special ones who have loved us into being.

Would you just take, along with me, ten seconds to think of the people who have helped you become who you are? Those who have cared about you and wanted what was best for you in life.

Ten seconds of silence. I’ll watch the time . . .Whomever you’ve been thinking about, how pleased they must be to know the difference you feel they’ve made.”

Both of these are famous, talented, and expert. Granted, the timing and circumstance of these two videos are very different. One was talking honestly about business. The other was receiving a lifetime achievement award. I tread lightly in attempting to compare them, but that particular day, I happened to see them both for the first time within an hour of each other and the words of Maya Angelou came immediately to mind:

For one, the world is one of scarcity where only the expert need apply. Those who look to her for inspiration are disrespected and disregarded.

For the other, the world is one of abundance, where even when you win an award for your own achievements, you can choose to make that moment about everyone else. Those who look to him for inspiration are honored and thanked.

Mister Rogers’ generosity reaches far beyond a TV show and, more importantly, far beyond himself. That’s why he was an artist who influences.