me and my nosey self

I have this thing where when I go see a movie in the theater, I don’t like to talk about it right away. And if I go with people who, right when the credits begin to roll, turn to me in the dark and say “So, whaddya think?” I will say nothing and just look at them. I don’t know why that is. I think it has something to do with the fact that I don’t want the strangers who sit behind us to hear my opinions. Because everyone just saw the same movie. To ask me what I thought is such an obvious question. Wow. That really made sense in my head.

But I had that same feeling walking in Harbour Town today. If you didn’t know about the couple who disappeared from here three weeks ago, you really wouldn’t notice anything different. Except everyone around here does know. And also because their boat is still in the harbor. I didn’t want to just walk confidently up to it and start snapping photos although maybe that would have been better than to pretend like that wasn’t why I was there.

So I lingered. And I took photos of the lighthouse and flowers and chains (yes, chains); some of my favorite things to photograph in the harbor. And then I sat down and shuffled some rocks. And then I took yet another picture of the lighthouse. And then I looked over my shoulder (yes, I really did) and snuck a few of the Yellow Jacket. 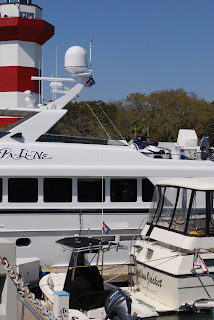 I’ve seen it here before…over the years of visiting the island. The yacht is small, especially compared to the Pa-Li-Ne that sits right next to it. Standing there looking at it, you would think her owners were simply down below or spending some time at the Quarterdeck for lunch. As I lingered, I heard passersby speculate about what may have happened to them, how they could have disappeared on purpose just to get away. At least 6 people took photos before I did. With their phones or their point and shoots. I could have gotten a better shot, but I would have had to get closer and it would have blown my cover. I don’t like to be obvious, you know. 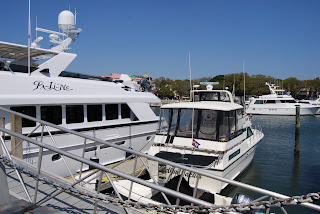 I imagine to the locals it might be annoying. I might be annoying. Disrespectful, maybe? But there is something about a tragedy that has gained nationwide attention that causes people to want to gawk in spite of themselves, especially a story that is shrouded in so much mystery.

I stood there for a bit, imagining what may have happened to this couple, hoping they are still alive and will walk along the manicured lawns of the harbor and take up residence on their boat again. I kind of hate myself for taking a photo of their empty boat, evidence that something just isn’t right. It is sad and strange and it is none of my business, really. But being here, I can’t help but think of them. And to pray that maybe they are coming back.