Fourteen years ago this week, I’m working at a local high school as a sign language interpreter. It’s morning and the bell rings to end the first class of the day.

I gather my bag just as the student I interpret for motions that she’ll meet me in the next class. Thankful for the few minutes, I make my way to the teacher’s lounge for a quick phone call. My sister is in labor and I want to call Mom who is with her to find out how it’s going.

The phone rings on the other line and Mom tells me there’s no baby yet, but soon. Just as I’m hanging up to rush to where I need to be, the principal’s voice comes over the intercom, announcing a tornado has been spotted in the area and everyone should stay put. I instinctively turn to look out the window behind me, surprised to see my own reflection staring back instead of the front lawn of the school. Outside is dark as night and it’s not even 10 am. 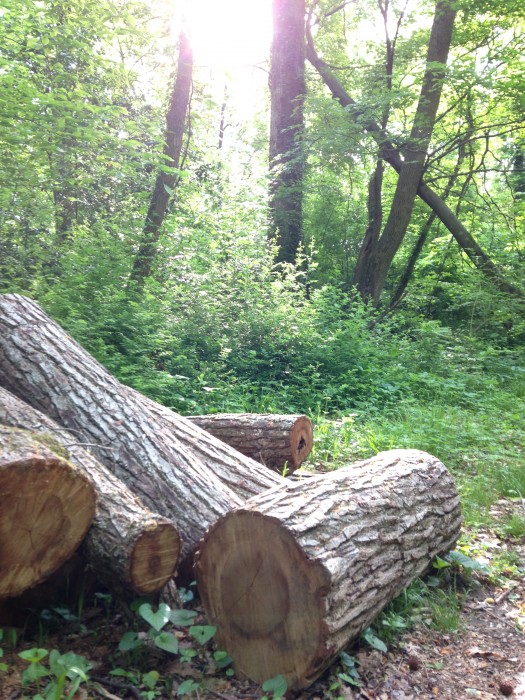 Later we’ll learn the storm that May morning wasn’t necessarily impressive according to the F-scale, wind gusts reaching just above 80 mph, but it still comes in as the worst the city has seen in 20 years. My drive home that afternoon is careful and filled with detours – around downed trees and power lines, the aftermath of the day the sky turned black.

My apartment wasn’t damaged and neither was my car. The school day eventually continued and my nephew, born later that day, is now almost fourteen. There isn’t any reason in particular I should still think of that storm often, but I do. Because of this. 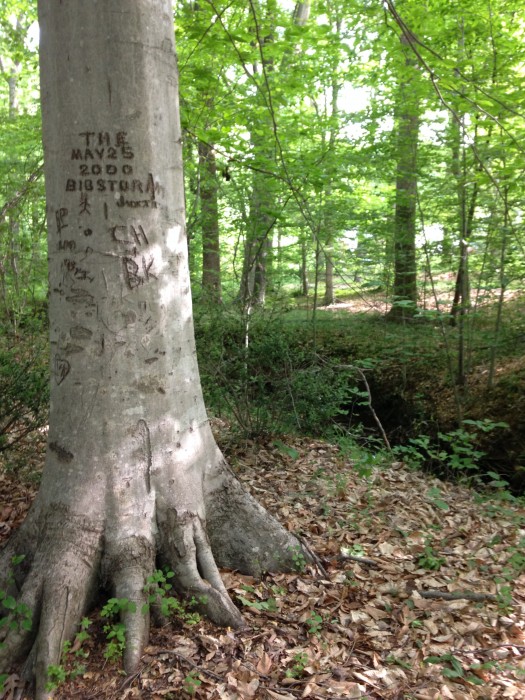 This tree in our neighborhood bears the mark of memory. I don’t know how the storm affected the person who carved the wood that day, but it was enough for them to take the time to mark it.

When I walk past this tree on the trail near our house, I think of that day still – how the principal had to make a choice for the sake of safety to keep the students inside, how the sky turned black and ominous, how we couldn’t change the weather, only try to stay out of its way.

That’s the way to handle yourself in a storm, take cover and wait for it to pass over.

It’s possible to live as though every move you make is an anxious attempt to avoid an unwanted consequence rather than a thoughtful decision to move toward life. And this life becomes one marked by hiding from the potential storm of loneliness, failure, isolation, invisibility, or insignificance. Take cover or the storm might overtake you.

Avoid danger. Sit under the banner of fear. 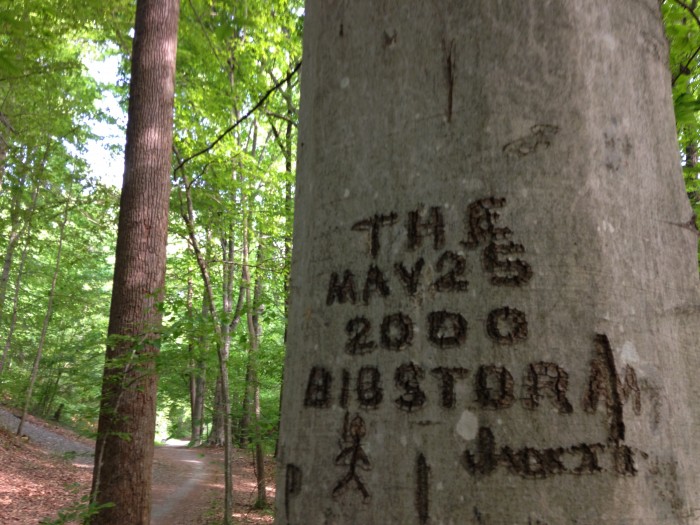 I’ve done that. When the kids were little I lived in fear a lot – of them getting sick and it never ending, of me getting sick and not being able to take care of them, of making the wrong decisions about where we should live, how we should school, if I should take a job or not.

When my first book came out and speaking opportunities started to roll in, I said yes more than I maybe wanted to because I was afraid of missing out on something. I also said no a few times because I was afraid I couldn’t pull it off. Fear works both ways, you see – keeps you from doing things you might want to do and convinces you that you have to do things you don’t want to do.

I still make wonky decisions based on fear when it comes to my work and my writing, my home and my life, but I’d like to think I’m doing that less.

Just two weeks ago I was wrestling through a should-I-or-shouldn’t-I scenario as to whether or not I should make a phone call. A phone call, you guys. It wasn’t something I had to do, just something I felt like I should do.

But when I took a few minutes to think about the reasons why I felt like I should make the phone call, none of the reasons were rational or good. Each one of them had to do with avoiding a consequence. If I call, then this person will be happy. If I don’t call, then this person might be mad. Love was never a motivation in this scenario. Only fear.

Storms everywhere, on every side.

I decided in that moment to do what I thought was best. I didn’t make the phone call and chose to believe whatever storm might come as a result, well. I’ll be okay. And guess what? I was.

This will probably always be something I need to walk through, making decisions out of love rather than from fear. I can’t prevent storms from coming, but I can decide not to invent my own. I like the idea of marking a storm like the tree-writer did. This happened, it was bad, and we lived through it. But I want to let go of the habit of making them.

What are your experiences with marking vs. making the storms in your life?

To have these posts delivered into your inbox, sign up with your email address right here. I post new content once a week and a short curated list of my favorite reads from the internet on Saturdays. Always glad to have you.