3 Reasons Why Lysa TerKeurst is an Artist Who Influences 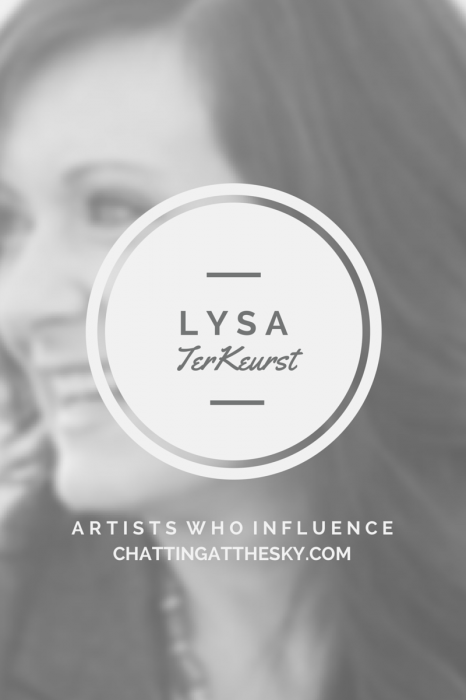 I first met Lysa six years ago after attending She Speaks, the training conference for writers and speakers that her ministry founded and hosts every summer. Lysa is the author of many books, her last three all landing on the New York Times bestseller list and let me just say to do that, you have to sell a lot of books is all I’m saying.

It might be easy to look at Lysa’s life and work from the outside and say oh well she’s an artist who influences because she has the ear of so many thousands of women. And she does. But you can be an influencer without also being an artists. Here’s why I think she’s both:

1. She sees the art in others and inspires them toward courage.

To this day I can safely say if it weren’t for Lysa’s encouragement and belief in me, I would not have written my first book when I did. I may have done it eventually, but I certainly wouldn’t have done it then. She encouraged me to write it without showing even a hint of doubt that I could. She believed in me before I had the courage to believe in myself.

Casting a hopeful vision for someone else is the work of a relational artist, and that’s what Lysa did for me.

2. She sees the world as one of abundance rather than one of scarcity.

One of the scariest parts of being an artist is to share your work, especially when it’s work you’re proud of. What if you put it out there and people don’t like it? What if they don’t understand it? Worse – what if they copy it?!

When it comes to writing, speaking, and ministry in general, Lysa generously shares what she’s learned along the way. She doesn’t hoard her knowledge or fear that if she gives it away, she’s somehow going to lose. Instead, she faithfully lives the truth of Janice Elsheimers words:

“Our gifts are not from God to us, but from God through us to the world.” The Creative Call

3. She’s brave enough to say yes but has the courage to say no.

Saying yes requires something – movement, commitment, sacrifice. Saying yes most often takes courage and I’ve watched as Lysa has said yes with confidence – not in herself but in the God who walks with her. But saying yes is not the only way to offer ourselves to God.

Sometimes making art in the world means taking the risk to move toward a goal or a person, knowing you could fail but facing it anyway. Other times the art we are to make in the world comes as a result of saying no and staying seated even when it seems like we should stand.

For every brave yes, there is often a no that comes right along with it. To say no could be just as artful a response as saying yes ever was. Lysa understands this and has even written an entire book about it.

I’m thankful for Lysa’s influence in my life, for the way her kindness, generosity, and courage has shaped my own work. That’s why she’s an artist who influences.

To learn more about Lysa, check out her blog and her latest book about the two most powerful words – yes and no – The Best Yes: Making Wise Decisions in the Midst of Endless Demands

. This is the sixth post in our October Series: Artists Who Influence. See the entire list of artists by clicking on the graphic below.