It’s the end of the month so it’s time to share what we learned in May! Remember, this is a place to share all kinds of learning, both the silly and the serious. I lean toward sharing the silly since I tend to share the serious every other day. But any and all learning is welcome. 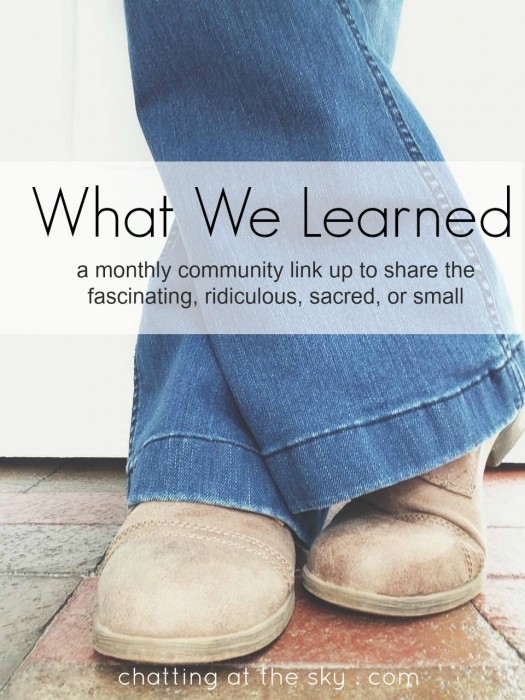 Here are seven things I learned in May:

1. What Barbie would look like without makeup (or, evidently, a toothbrush):

2. When people write LOML on the internet, it means Love of My Life.

4. The Office has a surprising lot to teach us about food.

5. Casey Kasem was the voice of Shaggy on Scooby Doo. I feel like I should have known this before now because it’s so obvious. But I didn’t.

6. The sugar-free version of my favorite drink at Starbucks tastes exactly the same as the regular version. (Grande Iced Hazelnut Machiatto made with hazelnut instead of vanilla.)

7. I finally admitted this to myself in May. I will, always and ever, become a puddle of sentiment and adoration when I hear old songs made new.

I don’t know if it is the simple fact that it’s comforting to hear something familiar re-made, or if it somehow speaks to the writer in me that feels the tension between creating and re-creating. (Maybe You’ve Done This Too?) And these new old songs remind me that my job is not necessarily to make something out of nothing, but sometimes is to re-create and re-imagine. I’m here to honor the truth of old, to hold the timeless realities close, and live like they’re true for me.

Maybe the fact that old songs still have new meaning help me to remember that.

Here are a few of my favorites:

And of course you can’t forget this version.

If you have written about what you’ve learned in May, we’d love to read it – just link up below! If not, I would love to hear what your favorite re-makes of old songs are in the comments.