I am in mourning for the end of my only summer TV show.

I am a big fan of So You Think You Can Dance. I’ve watched since the beginning. A few years ago, I saw Snow from season 1 in NYC at Wicked on Broadway. She was in the audience and walked past me during intermission. I almost followed her but I was 7 weeks pregnant so the idea of celebrity stalking seemed to take too much energy (though I have stalked celebrities before). Not to mention the fact that I would have probably puked on her stilettos.

For the first 2 seasons, I was a closet watcher. Until last year when I hit the jack-pot and discovered a group of girls who actually got together and watched. Every week. With party food. And you know what else they did? They voted. They all pulled out their cell phones at the end, and voted for their favorite dancer. These chicks were serious. 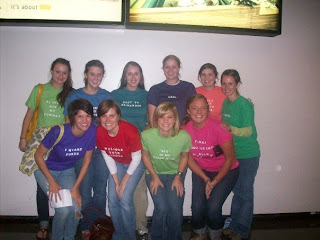 So serious that we ended up going to the tour when it came to town. We made t-shirts and everything. By “everything” I mean we actually wore the t-shirts. And were gawked at by other tour goers straining to read our chests bedecked with iron on letters stating phrases from the show like “Welcome your Jidges!” and “Shut the front door.” 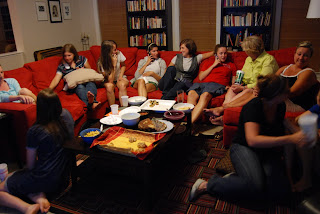 Tonight they will announce the results of last nights voting, much of which took place right in Kendra’s living room, as you can see if you look closely enough. So I’m kind of sad, in a surfacy sort of way. I love the show, the dancing, the personalities of the contestants. Mostly, though, I’m going to miss the weekly excuse to hang out with my dancing friends.