in which i prove my crazy

Last night, I read/watched this post by Laura Frantz. In it, she describes how she recently discovered that her daughter associates each letter of the alphabet with a color. So I’m thinking, Doesn’t everyone do that? But when Laura seemed surprised about it, I thought, Hmm, maybe everyone doesn’t do that.

So then I looked up the super fancy word that she says that is (grapheme – color synesthesia) and realized there are all different types of this -esia. One is called spatial-sequence synesthesia and relates with how people see numbers in their mind, or/also the days and months of the year. If you don’t do it, you’ll have no idea what I’m talking about. But to me, the months of the year go around an imaginary, slightly oval clock face, counter clockwise. 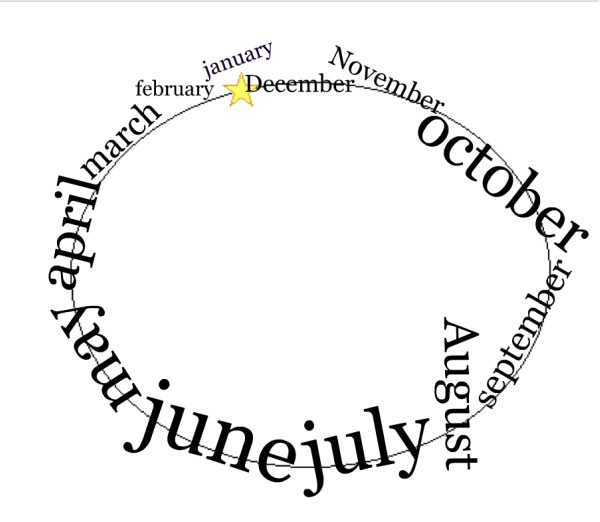 If I were better at graphicy stuff, I would have made this tilted in space, where the winter months are slightly higher than the summer ones. My view is standing on top of each month and moving through each one as time passes. So in January, I look down to see June. I have written them pretty much as I see them, including the size. I would have included their colors, but I got lazy. I put a star between December and January because there is actually a huge gap between the two, in my mind.

When I think of springtime, I think to myself Wow, I can’t believe we’re so far to the left! When I think of it being May, I picture us sliding down May right into June. August is always capitilized and is kind of a line, up a down (even though it sits in a circle). In September, I always think of how we’re moving back up. October is bigger than November, and December, January and February are always kind of crammed together (though separated by a huge gap, of course).

Laura tells me the letters-as-a-color thing runs in families. Maybe this does, too? Do you do anything like this? What are the colors of your alphabet? How do you see the year? Do you think I’m crazy?