how to be a better storyteller

They stood on the corner of Elm and McGee, laughing over flirt-heavy secrets and the funny things of nerves or love. Or maybe both. She was dressed for a date — ballet flats, strapless dress, a smile wide enough to connect the mountains to the sea. He had on jeans but left his ball cap at home and couldn’t seem to take his eyes off her.

The Man and I sat in front of the shop window, content to be together after coffee and dessert. I watched as the giddy couple seemed to be deciding where to head next. It started to rain a little. I had my camera with me and twice raised it to my face, stopping only when The Man shot me an amused warning glance, one that said It’s really cute that you want to take their picture but that’s creepy so don’t. They are the reason why I like photographing weddings – the affection between bride and groom make every photo come alive.

Instead, I turned around to get a shot of the shop window behind me. They always have the most lovely displays. As I did, I caught a glimpse of her in the opposite window. I guess her date had the same idea I did – Let’s capture this girl tonight, bottle up her happiness to pull out later and remember. So as she posed silly for his iPhone, I smiled and clicked my shutter. 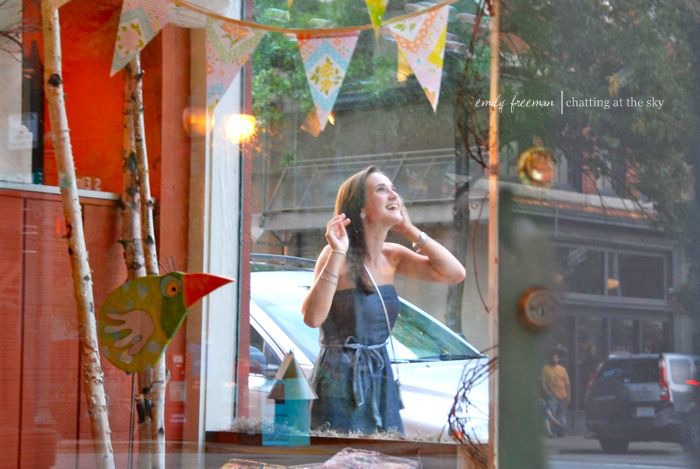 And so I got my picture, a moment of serendipity. I know it looks here like I’m just a creepy stalker, but she really did walk right into my frame. I wasn’t aiming for her, but there she was. And even if I got her story all wrong, even if those two weren’t in love but merely nervous or pretending, does it really matter? It may have been the wrong story, but it was still story.

There is always truth to be found in every human interaction. His touch, her response, the way they moved together. All of that was true, no matter the backstory. As a writer, I’m always looking for the story people are telling – sometimes a different one than they intend. 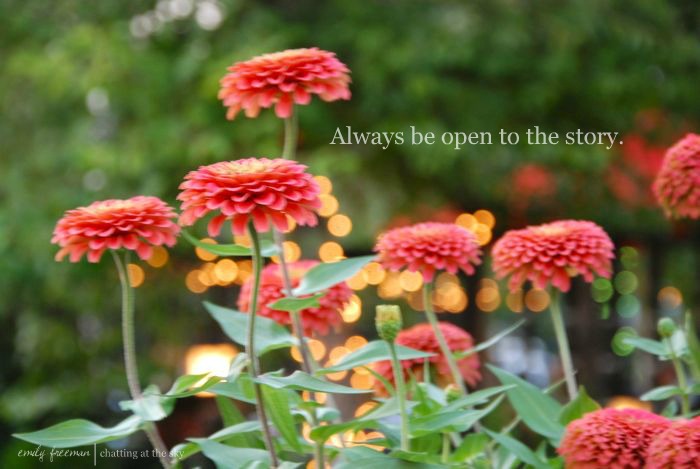 We can learn much when we open wide our eyes, close our fast-moving lips and tuck our hair behind our ears to listen. So when he plants a tree, there is more to the digging than just a hole. When she walks fast away, there is more behind her steps than just her speed. When they embrace on the street corner at half past seven and they don’t even stop for the rain, there is always more.

And so I see the story and it can be a strength – it compels my writing, inspires my photos, opens me up to the experience of others. It probably also makes me aloof sometimes, getting lost in my own imagination, following trails of truth off the well-worn path of the story their lives are telling. When I’m not in a good place, it can make me paranoid, seeing things that aren’t really there, hearing ghosts when it’s only the wind. I realize there all kinds of things that can come out when you open yourself to the story, beauty blending with insecurity, truth shaken up in fantasy.

Still, I’ve decided it’s worth it.

Do you learn from watching people this way? Can you think of a moment when a story came to life in your head from one simple interaction? I would love to hear.