How I Made A Hard Decision 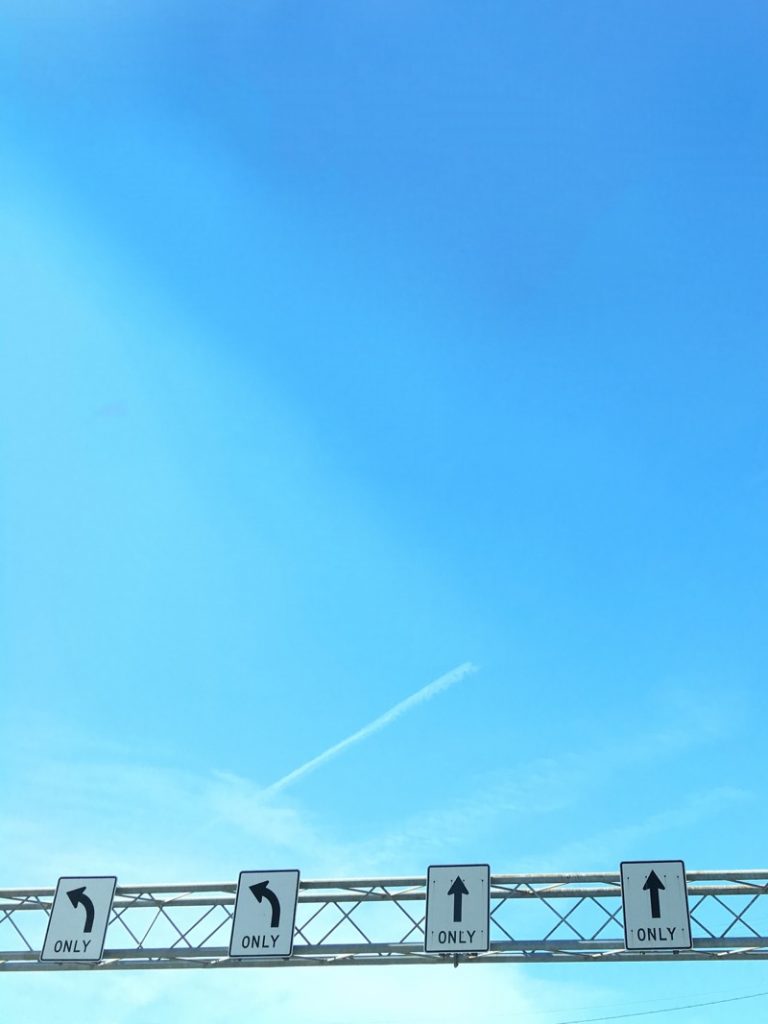 I could also title this post When You Have An Idea For Something And It Turns Into A Big Decision You Need To Make And No One Can Make It For You And You Aren’t Sure If You Even Need To Make It Exactly And You Wish Someone Would Just Come Over And Tell You What To Do And Make You Cookies.

But that felt like an obnoxious choice. So we’ll go with this one.

About a year ago, I drove a few miles down the road to my college Alma mater, walked into the admissions building, and took a long, deep breath.

I walked up to the open desk in the center of the building, the kind Ron Swanson’s nightmares are made of, and requested a copy of my transcript. 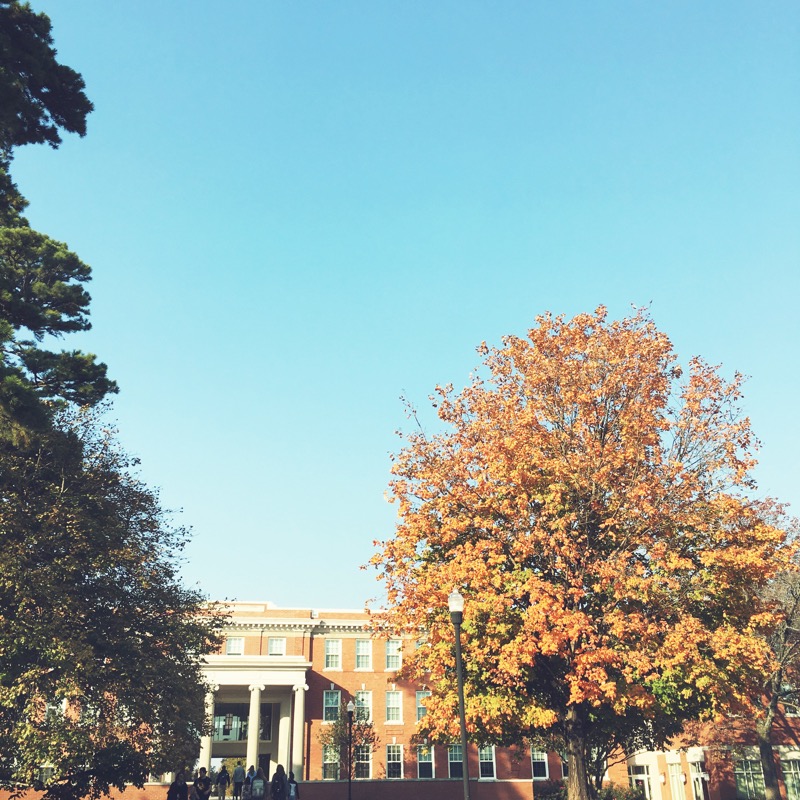 They gave it to me, I’m happy to report, but only after I paid a way-too-long-overdue parking ticket.

And then in late December of last year (that’s 2016 – yes it’s taken me this long to talk publicly about it) I applied and was accepted into a graduate program without much fanfare.

I even forgot to tell John that I got the acceptance letter until the next day. 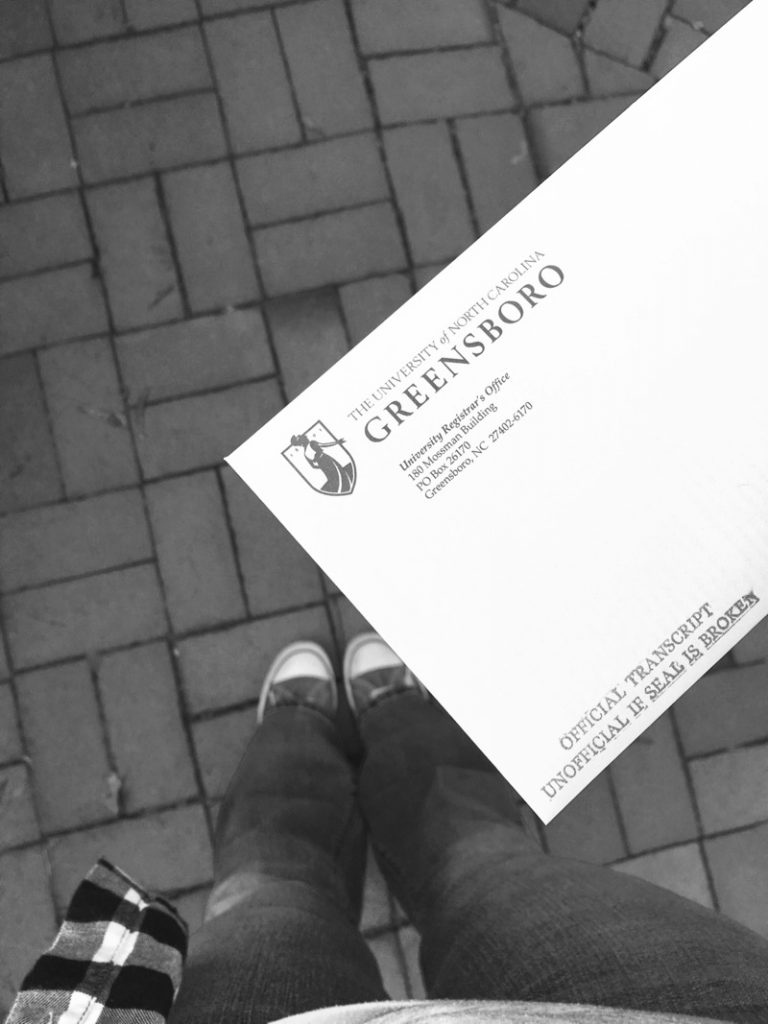 I shared this news with my letter readers several months ago and their kind response gave me the courage to share it here.

One normal question people ask when they find out I enrolled in grad school is ooo, why?!

It’s a normal question, one I would ask you, too, if you told me the same thing.

Why are you going back to school?

And this, my friend, is the question that kept me up at night for weeks before I made my decision.

Why would I want to do this?! I have a job, a family, a full life already. What is the actual point?!

It’s the question that begged for an answer while I tried to decide what to do next.

I didn’t have a clear plan with bullet points, a job I wanted to get that required this degree, or even the cultural expectation you have when you decide to go to college the first time because “that’s just what you do.”

At my age, going to school again is not just what you do. Unless you have a specific reason, requirement, or end game. 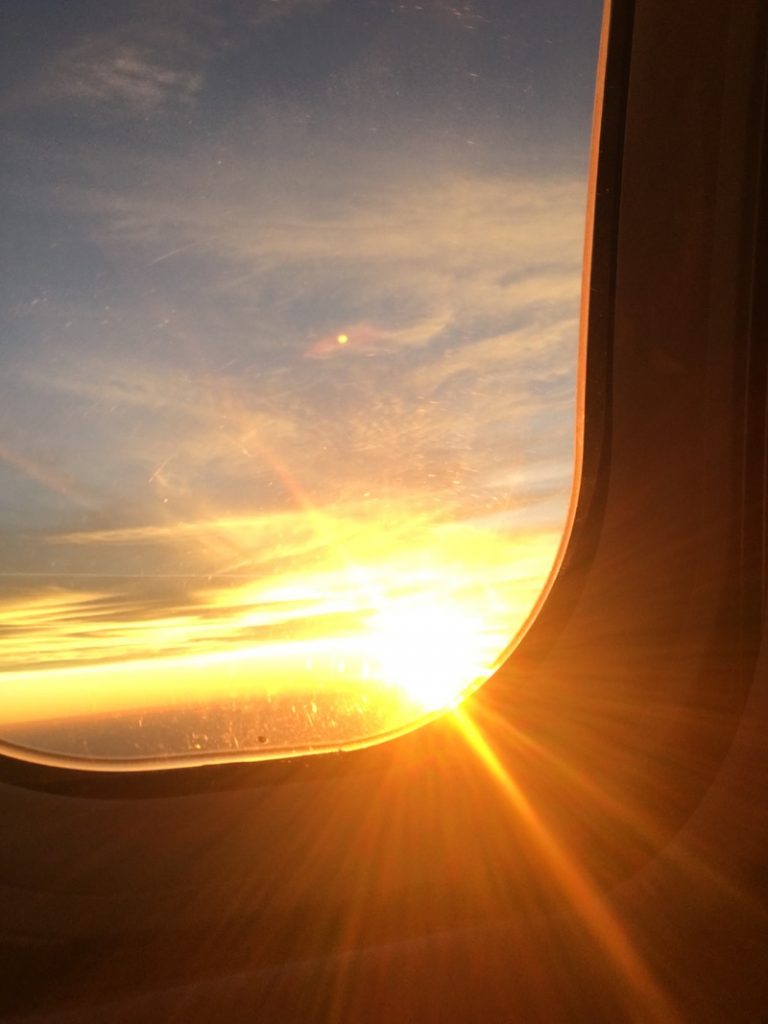 I talked with my spiritual director about this back when I was still in the deciding phase and she said something I haven’t forgotten (which she does every single time I’m with her.)

“Our Western minds are trained to go down the path of explaining. We think if we can understand it, then we can control it.”

I am conditioned to believe the only reason we should do things is if we know exactly why, where we are headed, and for what purpose.

No wonder we have trouble making decisions.

If we don’t have clear answers or sure-things, then taking a big step like this feels like a risk at best, a wasteful mistake at worst.

If I understand it, then I can control it.

This is what I know: I feel a call to the deeper life with Jesus and with people, in my personal life and my ministry life and my business life.

I’m not choosing a degree path because I feel like something is missing, but because finally, I can see the whole.

And what my wholeheartedness has been telling me over the past few years is that I want to learn more about spiritual formation, I want to become more fully myself, and I want to do it alongside a community of people who want that, too.

As of now, I’ve finished my first class and my second one officially ends in two weeks. It has already been life-changing.

In a little less than two years from now, I’ll have my Masters in Spiritual Formation and Leadership. 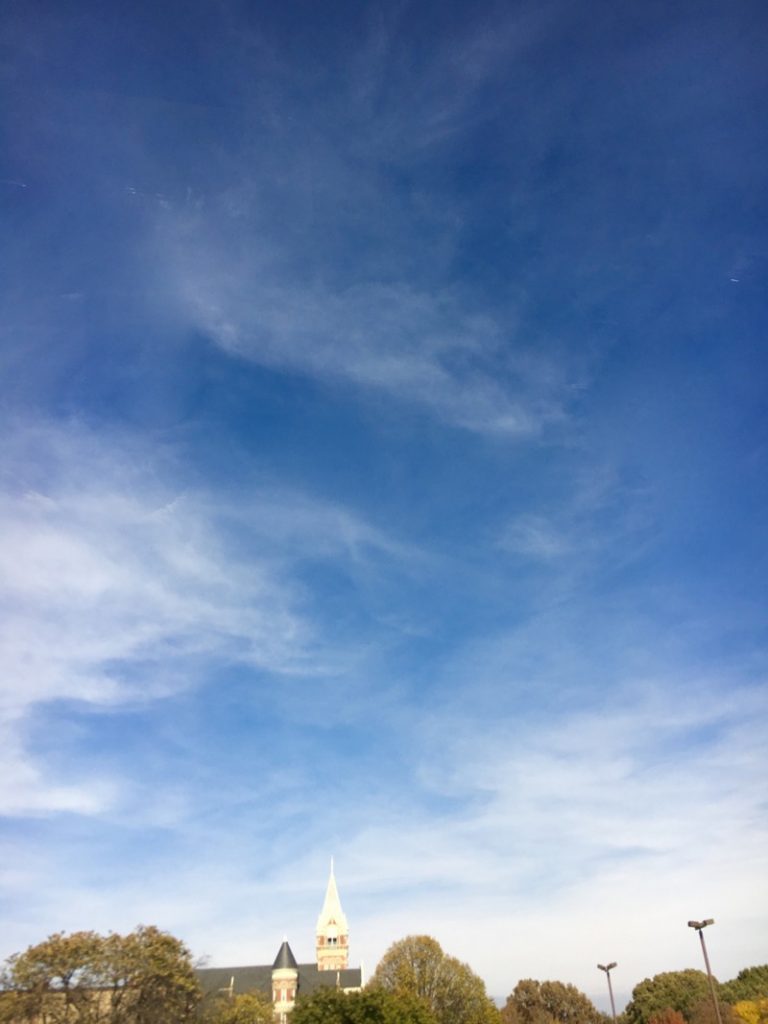 I don’t call it going back to school. You can, that’s fine. But I just don’t.

Going back sounds like I missed something the first time around, so I have to go back and find my way again.

Instead, I think of it as going forward.

I’m going forward to school and it feels just right.

I’ve been keeping this one close to my heart for the past year but it felt like time to share it in this space. When you write on a blog for nearly 12 years, stuff eventually finds its way here. It’s only natural.

Things are shifting in me and not a lot has landed yet. But this degree program is the next right thing for me for some reasons I know and some that I don’t.

If I am super honest?

One reason I’ve kept this quiet is because it feels sacred, in a way. I couldn’t bear to be part of the “women going to seminary/grad school as they get older” conversation that seems to be happening in places on the Internet.

I just want to take my next right step with Jesus and not have it be click-bait.

So there you have it. I’m figuring out how to do my job and be a mom and love John and serve at church and host a podcast and brainstorm my next book and go to school at the same time. 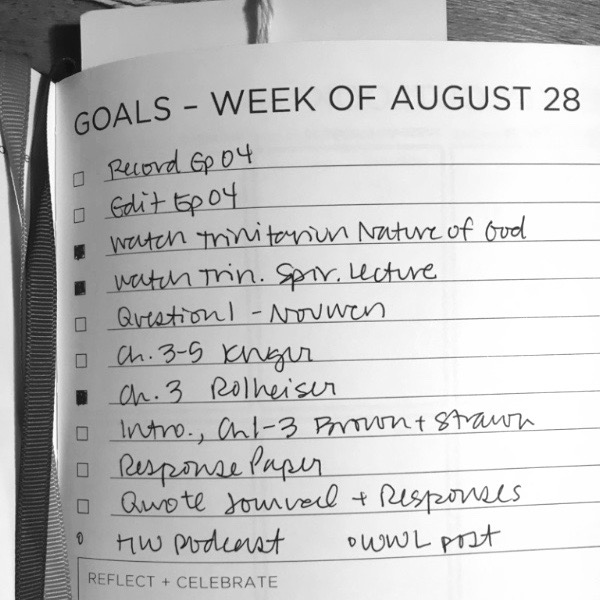 It’s a challenge and a lot but I have to tell you that I love it. I’ve cried and stayed up too late and gotten up way early and I’m figuring it out.

One immediate result of this should-I-or-shouldn’t-I decision making process is the podcast I started.

Because I was so worked up about making a wrong decision that it nearly paralyzed me from being able to make any decision at all.

So I started to write about that and it turned into a podcast for the second-guessers, the chronically hesitant, and anyone who suffers from decision fatigue.

I have released an episode every Tuesday for the last three months, but I’ve hardly written a blog post in that time.

It’s the perfect example of how our yeses come with some automatic nos.

So I’m falling in love with new things, with saying my words to you rather than writing them for a while.

This isn’t an announcement that I’m not writing anymore. I will always be writing.

Instead, this is a note to let you in on some things happening beneath the surface.

All of that, I trust, will make the writing better in time.

Meanwhile, my Mondays have looked exactly the same for the past three months: get the kids to school, head to my office, draft an episode of The Next Right Thing, record it, edit it, prepare it for posting on Tuesdays, the end.

It’s become a kind of liturgy for me, something I do with my whole body, in a way.

When I talk into the microphone, I actually feel like I’m talking to you. I move my hands way too much and have to edit out lots of extra sound because of all that movement.

I tell you all this because I want you to be in on it. I also tell you on the off chance you have a thing you’re carrying, too.

Maybe it’s something you’re thinking about pursuing, starting, making, finishing, or traveling to. But you don’t see the clear path, the end game, or the five year plan.

Is there something you need to go forward to, too?

Is there a path you’ve had your eye on but just aren’t quite sure?

Be gentle with yourself.

Pause the constant questioning of everyone else’s opinion.

Now hold that thing, whatever it is, in your mind.

Pay attention to your body and your soul – does it rise or does it fall?

Here’s something I do before every hard decision and this practice has often been a lantern on a dark path for me.

May it be so for you as well.

If you receive my monthly letter, you’ve already known about this new development in my life for months now and I want to thank you again for your kind response when I shared this with you. I always share news with my letter friends first. Want to get on that list? Just add your name right here. 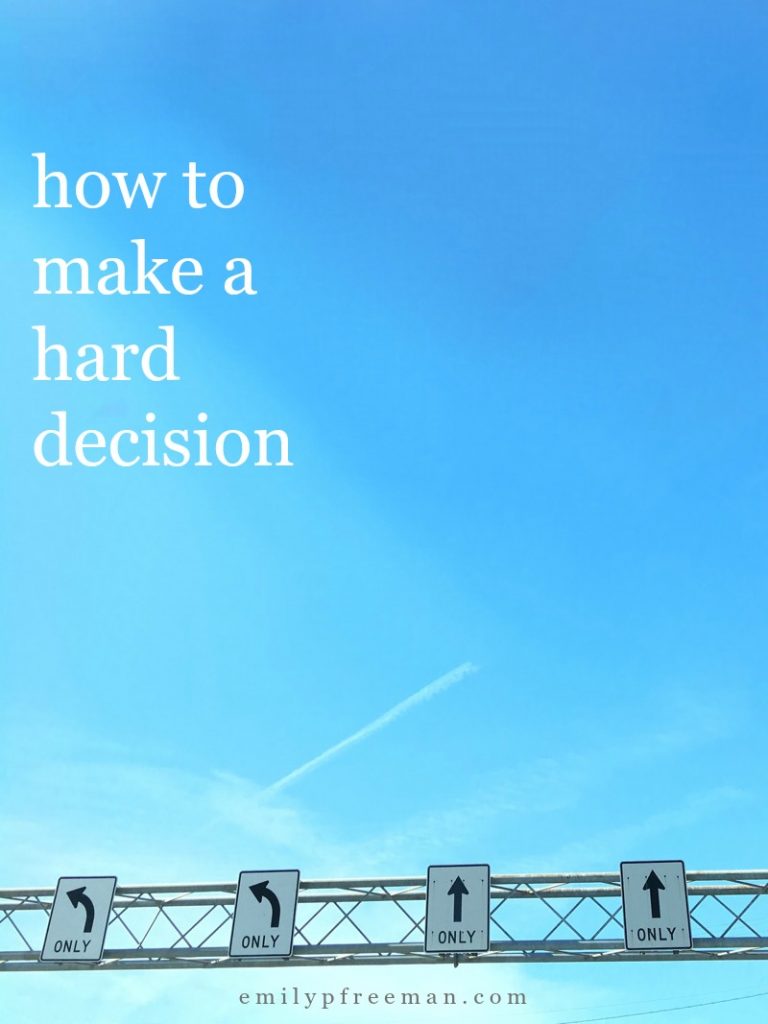