In my last post I mentioned that the reception for the beach wedding was held in downtown Wilmington in this great old brick building. 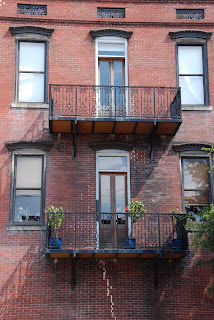 But the important part is that it was situated right across the street from the wall Pacey bought Joey during Season 3 of Dawson’s Creek. And with that, I know some of you just decided to remove me from your readers.

I didn’t start watching the show until about halfway through the series. I spent many Wednesday nights rushing to Sissy’s apartment by 8pm so I wouldn’t miss the beginning. There were no DVRs for Dawson. It was kind of nice, though, as Sissy and I spent the commercials catching up on our days really fast until the show came back on. I like watching shows with friends. 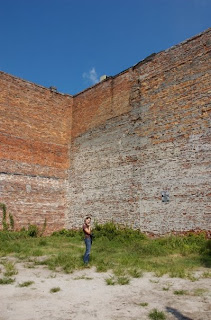 There’s me with Joey’s wall. See how big it is? Wilmington is the home of the largest sound stage east of Hollywood, Screen Gems Studios. How do I know this? Duh, because when our wedding duties were over, we took a tour of it. Aside from being the former home of Dawson’s Creek, the studio also films CW’s One Tree Hill, which is the actual set we toured. I’ve never seen one episode of that show, but it was still pretty rad to be on a hot set of a current show. I know all the lingo.

Now the actors, they really are painted wood. Pretty talented set designers if you ask me. So tell me: have you ever been on a set tour? a live taping of a show? an extra in a movie? I want to hear all about it. Especially if the show was Friends. Just being honest.