You’re going to regret you ever asked me to write about my new house. I’ve been making decisions left and right. It’s enough to make a girl a bit dizzy. Thankful for sure…for the opportunity to pick stuff out that I like. But being so close to it all, it’s becoming harder for me to see the forest for the trees (or the paint for the wall, I should say).

Here’s where I need your help. As you know, this is where we started in this paneled room. 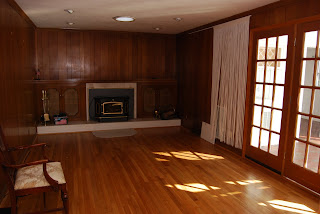 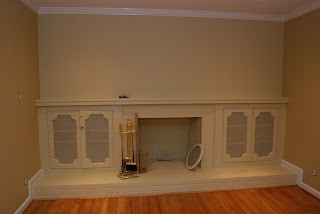 Turns out that Buff wasn’t so Believable after all. I thought it looked like those shelves needed their teeth brushed. The Nester said it looked like a powdered face with no lipstick on. We had to do something. 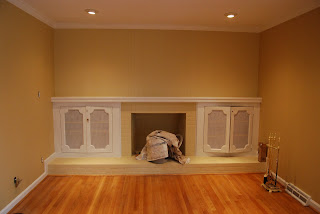 So we painted just the mantle and the wooden bookshelves white, same as the trim. It still ain’t right people. Or is it? It isn’t…right? I just can’t tell anymore. This photo was taken without a flash so it’s kind of hard to see the true color. The two walls on the sides are still Tobacco Road and the wall above the FP as well as the brick is still (un)Believable Buff. But I just don’t know.

I know in light of starving kids in Africa and Hurricane Katrina victims and that homeless man on the corner that always looks me in the eye when I pull up at the stop light, this stuff is so trivial. I know that. Still…I have to decide on something and quick. I may not take any of your suggestions (well, except you Nester. You’re opinion is always gonna be a bit weighted), but I still want them. So….what do you think?