Emily is a writer and photographer living in Florida with her husband, two kids, and two dogs. (And five chickens!) After quitting her job and selling their home, her family moved to Florida five years ago and bought a fixer-upper. Walks on the beach keep her sane during house projects. To learn more about Emily, visit her at Remodeling This Life.

The house I grew up in had three stories plus a basement. The basement was partially finished with a couch and TV cabinet. It is where my brother and I hung out, watching MTV and playing Nintendo together. The main room of the basement had smaller rooms around the perimeter rooms, closed off by doors that housed tools and work areas for my dad. It was those rooms that scared me. The dark spaces in the peripheral that held the unknown. If I was down there with my brother, it wasn’t as scary. He was a red head. Surely any lurking monsters would eat him first.

The only light to the basement was at the top of the stairs. Because it is what brothers do, sometimes he would go upstairs and leave me down there alone, switching the light off on his way. I’d hear him laughing in the kitchen as I scrambled, terrified, yelling at him as I skipped steps up the stairs to switch the light on as quickly as possible. With the light, everything was alright. 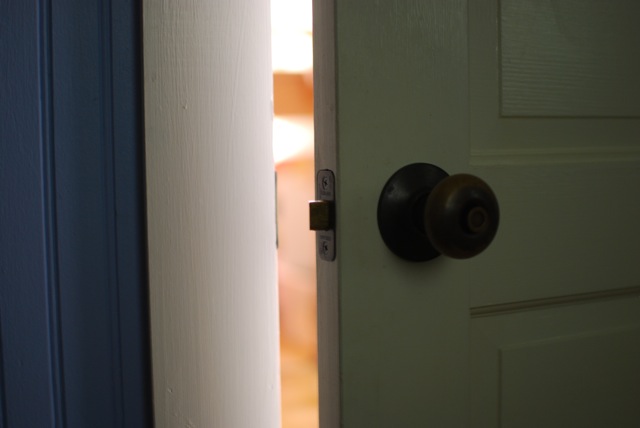 I’m older now and at least pretend well that I no longer believe in monsters lurking behind doors in dark rooms. But sometimes, I find myself in the deep dark basement of despair, feeling like a little girl – insecure and afraid. When I find myself there, I will sometimes forget how easy it is to sprint to the light switch and flick it on. Instead, I will stand frozen in fear and I cling to the lies the darkness tells me.

Then, a gentle and kind reminder in the form of light through the crack at the threshold of the door reminds me there is light on the other side if I only I reach for it. The sliver of light shows me the way. Up the steps, back to The Light where everything is alright.

What a vivid, gentle reminder that we get to choose what we believe. We can stay frozen in fear at the foot of the stairs, or dash right up towards Truth. I had the priveledge of hanging out with Emily in real life at BlissDom last year. She is a gem wrapped up in funny and tied with a beautiful bow. Visit her about page to learn more about her journey.