Your comments on my last post made me cry. In a good way. I wrote it to process through some of that unshakable fear. So thanks for being my sounding board.

The car is totaled. We figured it might be, as there were lots of “crumbs” on the street after the accident. (The twins tend to think of messes in terms of food. You understand.) I guess that means we are in the market for another car. And The Man seems to think this one needs to be a mini van. I am officially and absolutely a mom now. 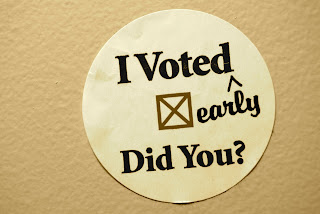 In other news, I voted today. I stood in line for an hour and twenty minutes. I found a comfortable spot against a piece of wall in the gym of the recreation center. Then, I watched along with my fellow voters as thirty senior citizens did slow bicep curls to the tune of The Phantom of the Opera. If I were 75 years old and showed up for my Friday morning exercise class to find an audience of bored voters wrapped around the gym, there is a strong possibility I would fake a heart-attack to get out of it.

I brought a book because I knew there would be a wait. There was a lesbian couple in front of me and a woman behind me with strong coffee breath who was very concerned about her name change form. My book became more of a prop as I became increasingly interested in the people around me. Guess what Coffee Breath and the Chatty Beekeeper behind her talked about? Coffee. And Bees. Not kidding.

Turns out Coffee Breath is a divorced nurse who was married for a year when she and her husband decided to call it quits. And Chatty Beekeeper is trying to find his way in a single world after so many years married.

He is going to a concert tonight.

My eyes shut instinctively and my body tensed in anticipation of an awkward exchange. Is he going to ask her to join him?

He didn’t. I exhaled in relief, glad I didn’t have to listen to her hazelnut flavored rejection of him, right there in the line to cast our vote for the next President of the United States.

Have you voted yet? What conversations did you eavesdrop on? If you’re waiting to vote on Election Day, do me a favor and listen. We could write a best-seller on these voter line conversations. I know we could.