Just Do The Next Right Thing

My new book, The Next Right Thing, is available at bookstores nationwide today! We’re extending the offer for the free bonuses through Friday, April 5th — so if you order online or purchase in a bookstore, you can receive my online class and the audiobook for free! Head on over to NextRightThingBook.com to redeem your free gifts by this Friday night. Once you claim them, you’ll have access forever. Get your book, then claim your bonuses here! 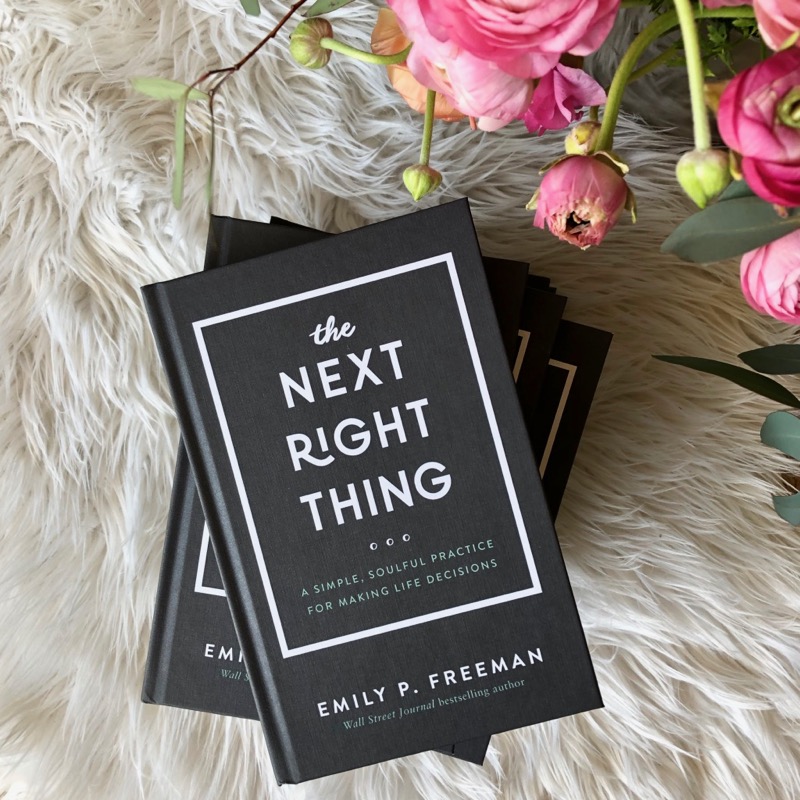 My last two years of college I was a commuter student and every day I dreaded the task of finding a decent parking space. I tried to arrive on campus almost a full hour before my classes started so I could ease the frustration of frantically circling campus for a space.

To my great delight, I discovered a radio program hosted by author Elisabeth Elliot that helped me pass the time. The program was called Gateway to Joy, and it was broadcast daily from 11:15 to 11:30 a.m. Countless mornings, I sat in my car before class and I listened to her open her show with these words:

At that time in my life in college, her daily assurance of God’s everlasting love was a welcome mantra, one I embraced and repeated often. Something else she quoted, both on her show and in some of her books, was a poem called “Do the Next Thing.” She never offered the author of that poem, only ever citing it as an anonymous writer.

Years later, when I started work on a podcast all about doing the next right thing, I became curious about where that poem came from, the one I heard her repeat so often.

One afternoon, I was determined to use the powers of the world wide web and do a little digging until I finally found it. The poem was, as far as I could tell, originally printed in a little book called Ye Nexte Thynge by Eleanor Amerman Sutphen, published in 1897. 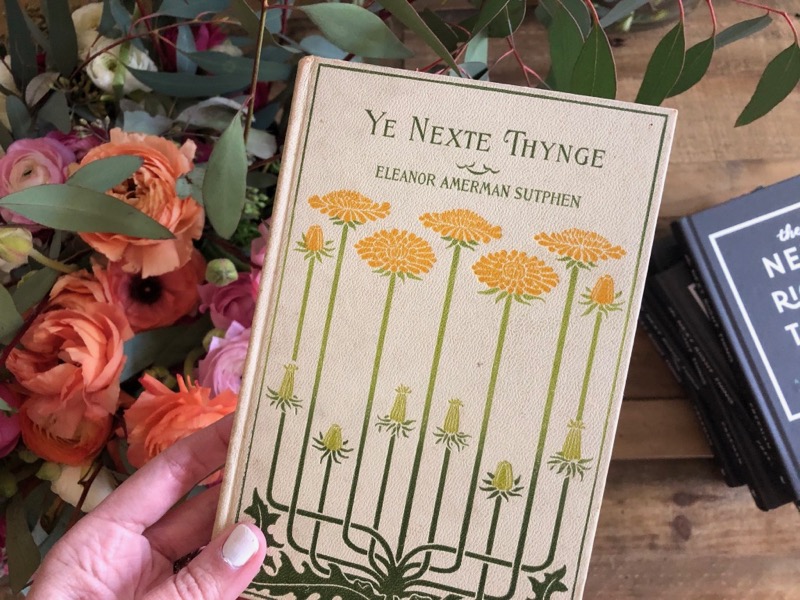 Now the book itself is a bit odd but also sort of charming, about a group of young people who wanted to see other young people active and involved in their church and committed to God. They were led by a minister named Rev. Mr. Bacon. Here’s a few lines from the book about him:

“His desire was to get his people out of the old ruts, and to start them forward along new lines. But the spirit of self-satisfaction is a hard ghost to lay; and the young minister realized, therefore, that his task was not an easy one.”

The story goes on and it’s not exactly a riveting page-turner, but a close read shows a depth of spirit and truth that a casual glance doesn’t at first reveal. But I was most interested in what comes before chapter one. Because there, in the first pages of the Sutphen book, is the poem that Elisabeth Elliot quoted so often on her broadcast. 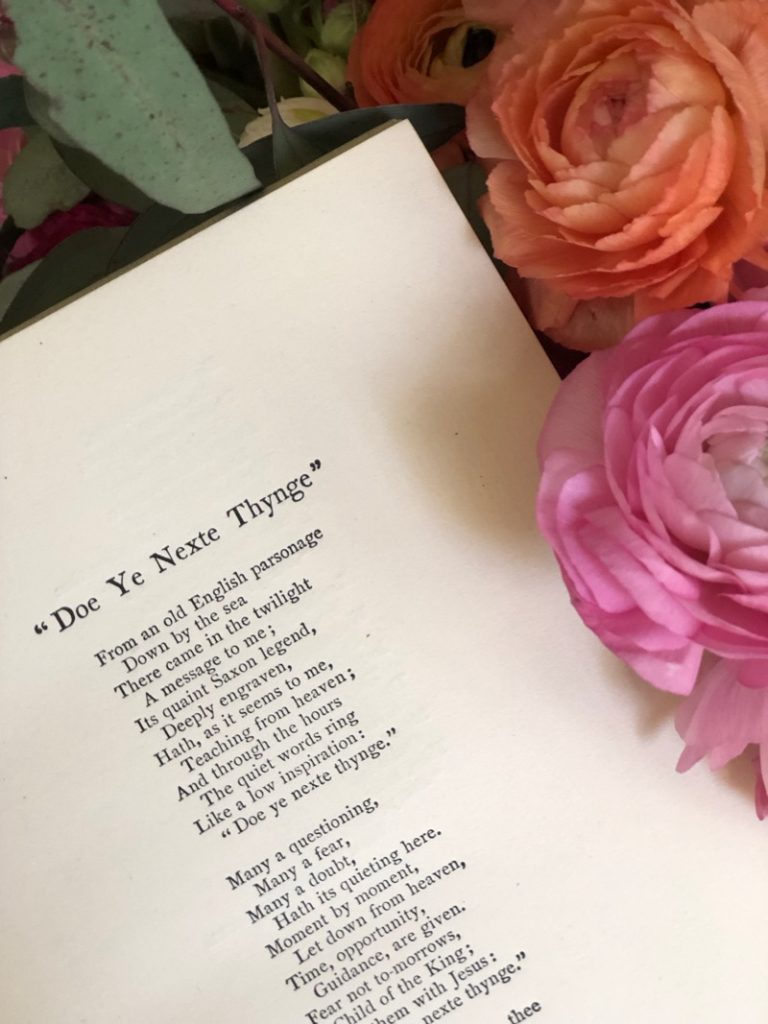 It’s printed in its entirety and at the end credit is given to its author, Mrs. George A. Paull. A little more research showed her name is actually Minnie and she was a musician, a minister’s wife, and a writer.

I tell some of this story in chapter four of my book, but what I don’t include in the book is this next part.

The day I found this quote on the Internet, I clicked to the front pages of the Google book to find out who the publisher was. And when I saw it printed there I could hardly believe it. 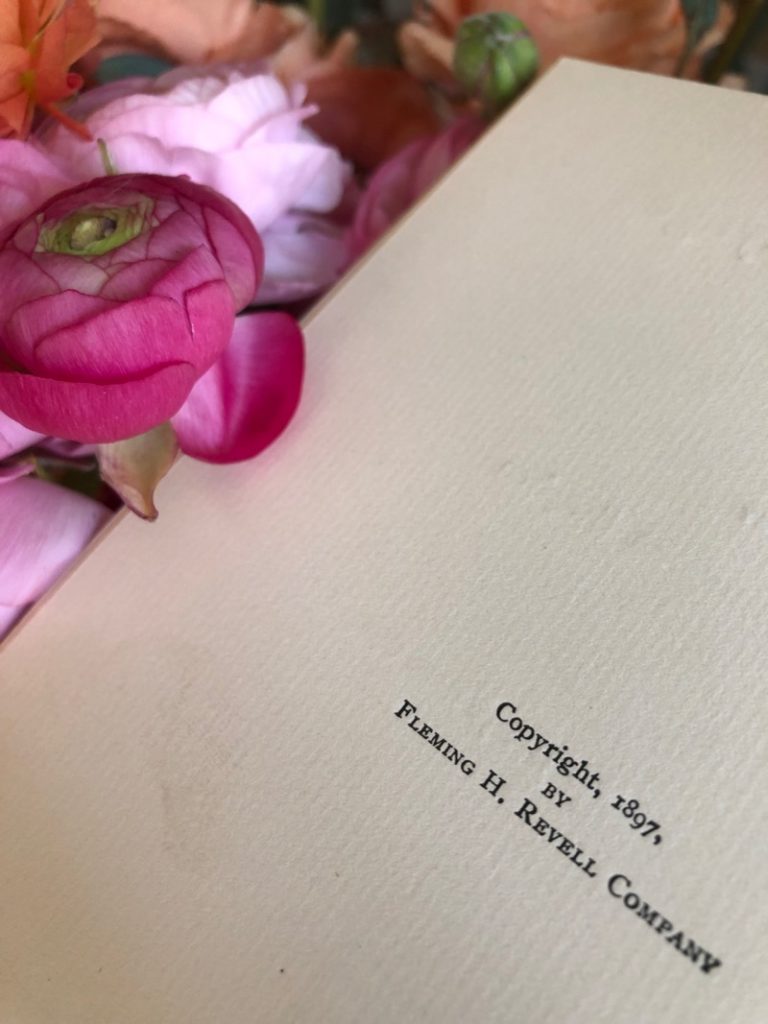 That little book called Ye Next Thing by Eleanor Amerman Sutphen, the one with this poem by the writer Minnie Paull printed inside, was published in 1897 by Fleming H. Revell company, the very same publishing company who published my book, The Next Right Thing, releasing this very week.

Here we are, 122 years later, still hanging on to this wise advice, still paying attention to what is right before us, still trusting God to tell us what we need to know when we need to know it.

When we do our work, offer a prayer, lend a hand, or continue to move through the ordinary tasks of our regular days, we never know how people years from now may be impacted because of our faithfulness. That’s not to say we have to get it all right. In fact, Minnie, the woman who wrote that poem, struggled deeply with doubt. 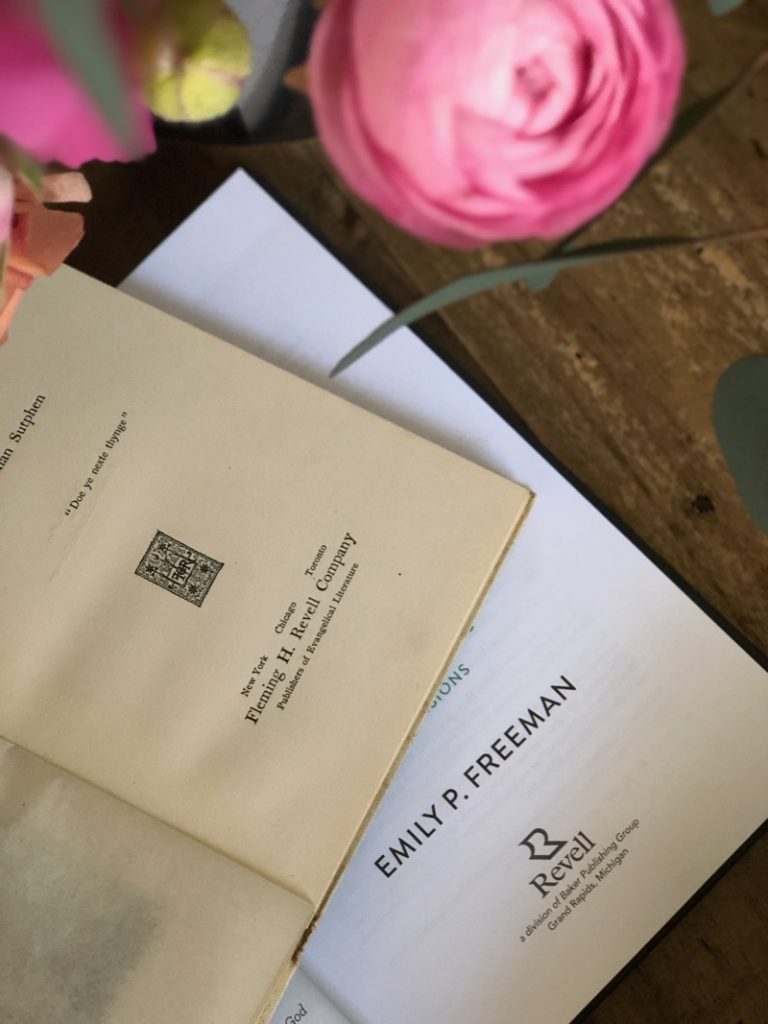 Part of her own journal reveals that. She was writer so she wrote down a lot of her experience. Here is part of what she says:

“There is just one thing to keep me from being blissfully happy, and strangely enough it is the last thing that I ever imagined would trouble me. I wish I could make up my mind about the reality of God. Though I believe in a vague sort of way, I have hours of anxious self-questionings, and cannot bring myself to the intense realization of the truth which I feel to be necessary.

I am groping blindly, and though I am trying to see God, yet a cloud is before my eyes, and I cannot even believe that he is behind it.”

Isn’t that how it goes?

This woman who wrote a poem so thoughtful, so faith-filled, she herself recorded her own struggle with doubt and with questions. But she continued forward through mixed motives, through the shadows and the sun, through her own next things even in the midst of her struggles.

And now her words continue to encourage us today, all these many years later.She could never have known the impact. 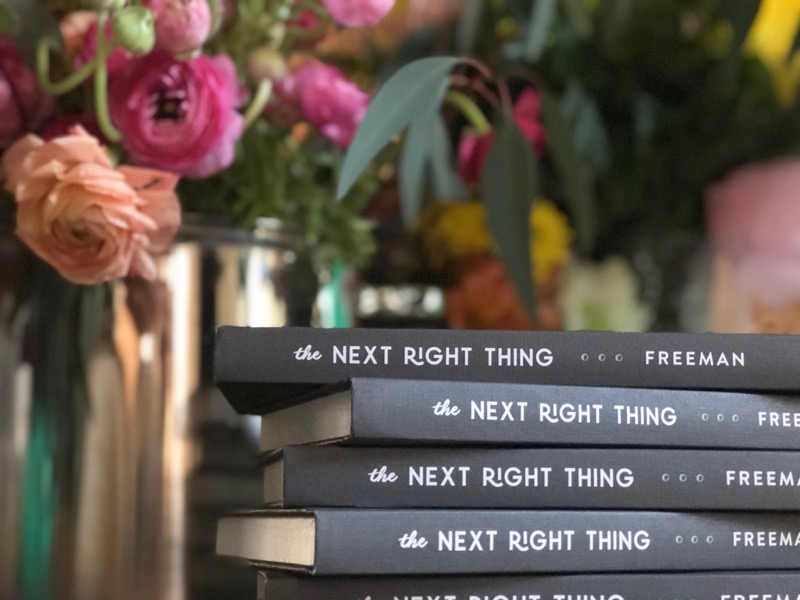 As you continue to carry your decisions with you, we’ll use a portion of Mrs. Paull’s poem as our prayer. Imagine God walking with you, issuing a kind invitation to release the burden of both heavy and daily decisions into his care.

From an old English parsonage down by the sea

There came in the twilight a message to me;

Hath, it seems to me, teaching from heaven;

And through the hours the quiet words ring

Many a questioning, many a fear,

Many a doubt, hath its quieting here.

Moment by moment, let down from heaven,

Time, opportunity, and guidance are given.

Fear not tomorrows, child of the King;

Trust them with Jesus: Do the next thing.

Do it immediately, do it with prayer;

Do it reliantly, casting all care;

Do it with reverence, tracing his hand

Who hath placed it before thee with earnest command.

Leave all results, do the next thing.

I can’t thank you enough for your kind support and I’m grateful to be able to offer you a whole book that I hope will serve as a kind companion to both you and to people in your life in the midst of their own decision-making process. Get a copy of The Next Right Thing anywhere books are sold, including Barnes & Noble (in store or online) or Amazon. Then don’t forget to claim your free gifts by April 5 right here!