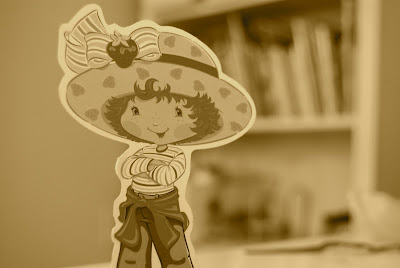 It’s a paper strawberry shortcake doll and it came inside a pop-up book along with several other dolls like it. You can’t change their clothes, brush their hair or move their arms. But these flat, 2-D, paper dolls have managed to hold their interest above Polly or Barbie or even Dora. I think I may have even wondered why out loud. And then, I remembered…

I was 8. Or 9. I may have been 10. Fine. I was 12. I remember looking through magazines and cutting out photos of models, then I would name them and make up stories about them in my head. Sometimes I would cut out photos of the same model with a different outfit on and pretend they were twins. Most of my characters came from JCrew magazines because my mom got that one free in the mail. One set of twins was Cameron Diaz before she was famous. I still think of that when I see her on TV and I like to think I saw potential in her before she was discovered. What? I know.

If someone were to walk into my room while I was playing, they would have seen me on my bed, sitting silently, staring at several piles of cutouts. I did not stand them up and make them talk to one another. I would categorize them into groups of friends, siblings, rivalries. The cutouts were merely reference for the stories I was writing for them in my head: their friendships, personalities, family ties.

I am willing to admit all of this to simply say this: a story is a powerful force. Nobody ever sat me down and taught me how to make up stories, or even suggested that I should. I was naturally interested in people and their stories, even people that only existed in my head. (And with that last sentence I’m certain I solidified the suspicion that you have undoubtedly been hiding, telling you that I am indeed crazy.) I have never taught my girls how to pretend. They just do.

I think all kids do this, just not in the same way. My sister, for example, would rather decorate the Barbie house than act out pretend scenes with me, which she freely admits on her blog. I remember being so frustrated as a kid playing Barbies with her because I wanted to play Barbies and she just wanted to dress them. And arrange their furniture. But it is the same idea. She was making up stories too, just not about the same things. She was imagining, creating, and playing in a way that interested her.

It also happend to make me crazy, but whatever. I had bigger things to worry about…like hiding the fact that I cut out characters from magazines. As a 12 year old. Yikes.