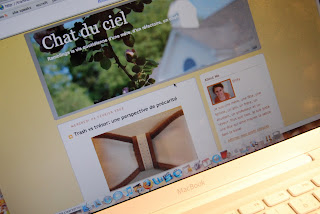 This is my blog translated into French. I can’t think of a more important way for Google to spend their time…I mean, really. Don’t you just picture a long line of desks in a blue-lit room with a bunch of people from different countries sitting at computers, frantically translating blogs into their native languages? I think I like my site better in French. 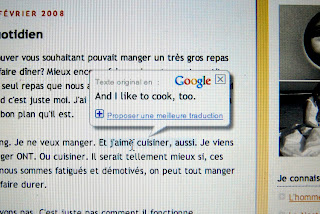 See what i mean? I feel so smart, so cultured. It looks like I’ve got lots and lots of important things to say. I even look better in French. 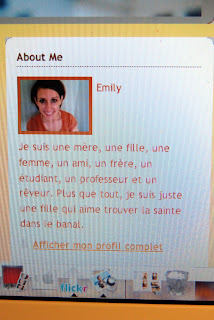 I guess those French people aren’t as self-focused as we are over here. They apparently have no translation for ‘about me’.

It makes me think of the time I was interpreting for a student (have I mentioned I use to work as a sign language interpreter? Well, I did. Before I had all these kids, that is). Anyway, I was interpreting for a high school student who asked me if 56 and fifty-six sounded the same when spoken out loud. Wha…..t? But then I thought more about it and realized what a legitimate question it was. In sign language, the number 56 is signed 5 – 6. And if you spell it out, well, you spell it out. But when you say the number or the word in English, it’s the same.

I really do love languages. I’ll have to share more about my life as an interpreter. There are many wonderful tales to be told. In the meantime, check out your blog translated into French. It’s cool. And it will make all those people in the blue-lit room feel as though their work has purpose. It could help to off set the excruciating pain they experience from the carpal tunnel syndrome.

*10:20 pm: It has just been brought to my attention that my blog name has been translated “sky cat”. The real French translators must be on a writer’s strike. Consider my name changed from chatty to catty. Thank you and have a nice day.