Before Helpless Turns to Hopeless

Over the last few weeks, as the bad news reports of terror and racial tension and coups and shootings and confusion have rolled over us in waves, two phrases run on a loop in my mind and heart, phrases I’m sure you’re carrying as well:

What can we do?

It’s a short trip from helpless to hopeless, just a shuffling of a few letters and you’re there. I’ve felt the helplessness creep in over the past several days and when that happens, hopelessness is never far behind. 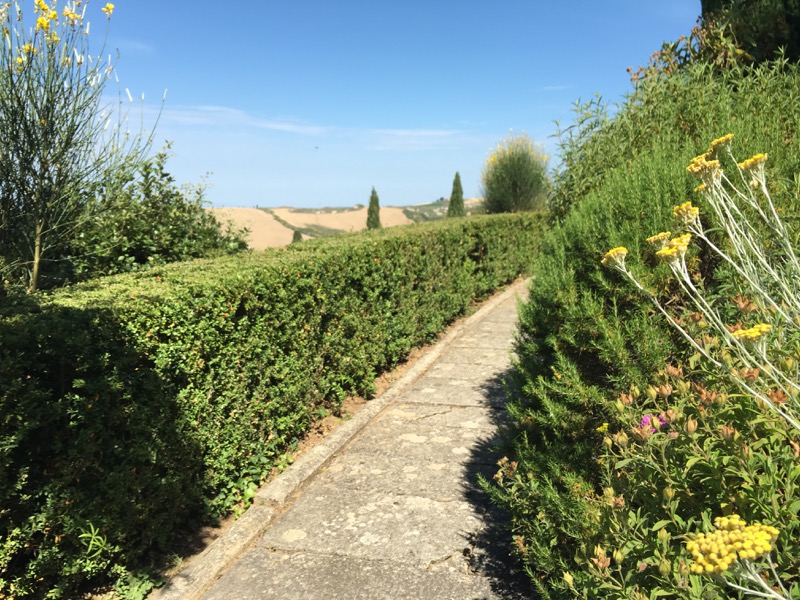 Add to that the fact that I am a painfully slow processor when important things happen – both the joyful and the tragic – and we’ve got ourselves a bad combination.

For a mountain of reasons that aren’t actually the point of this post, I’ve not written much lately. When faced with the time to write, I choose to read (First Women by Kate Andersen Brower), watch TV (A Chef’s Life), or stare blankly out the window instead. 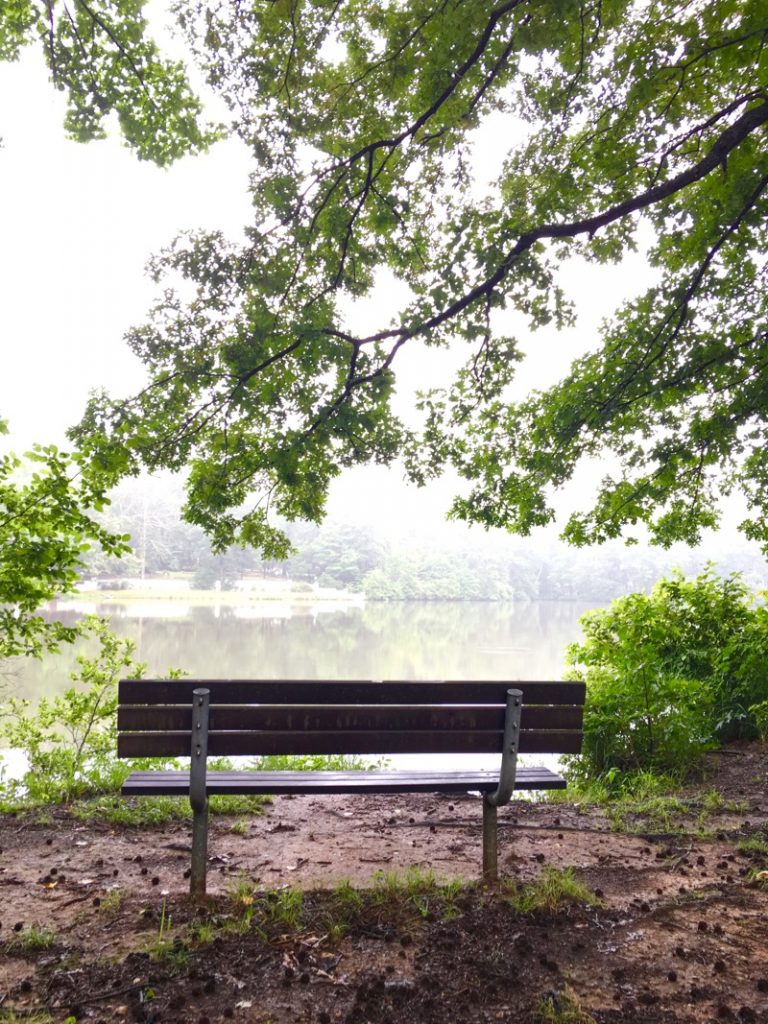 And while intellectually I know this lull is a normal part of my life and creative process, it can be difficult to navigate, especially in a fast-paced world where the rhythm of input and output seems balanced and breezy for everyone else.

I’m working my way back, forging a quiet path through foggy confusion, back to the road of hope. I’d like to take you with me if you’re willing. We’ll make a stop in Italy, if you don’t mind, because that’s where I’m discovering a bit of hope from the past to inform the present.

I’m not yet sure how this will turn out, but that’s the beauty of blog writing – it’s an invitation to enter into the middle of a story without the pressure of either having to know the beginning or close it up neatly.

A blog is often a collection of middle narratives, reflections that happen in between beginnings and endings.

Enter with me into a story of love, hometown heroism, war, and mostly hope.

Fifteen days ago, John and I arrived sun-kissed and bleary-eyed back on US soil after spending ten days in Italy. 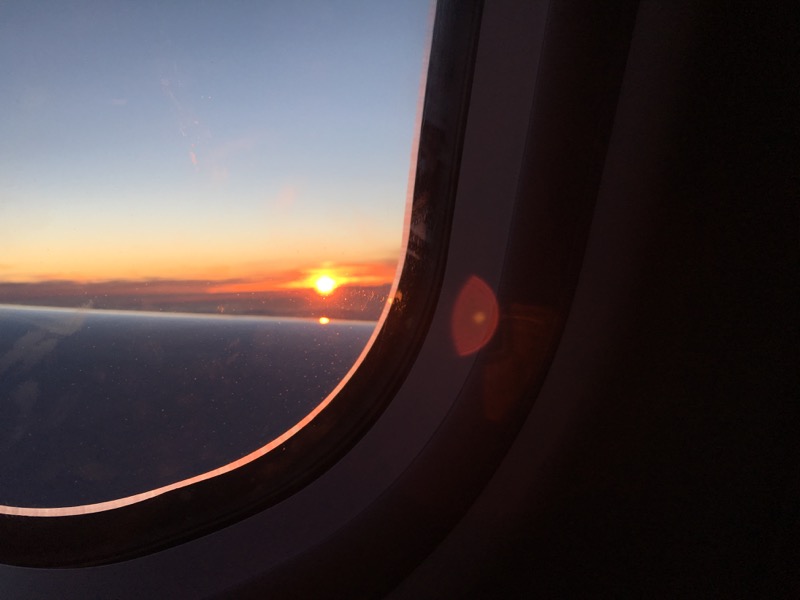 We spent most of those days in the quiet countryside of Tuscany where we learned the story of Iris and Antonio Origo.

She was born Iris Cutting in England in 1902 to her wealthy American father and her English mother. Her father died when she was only seven and her mother brought her to live in Italy after her father’s deathbed request that she grow up “somewhere where she does not belong” so that she would be “cosmopolitan from deep down.”

This is where she spent the next years of her young life, living at the Villa Medici, built by the most celebrated family in Florentine history. 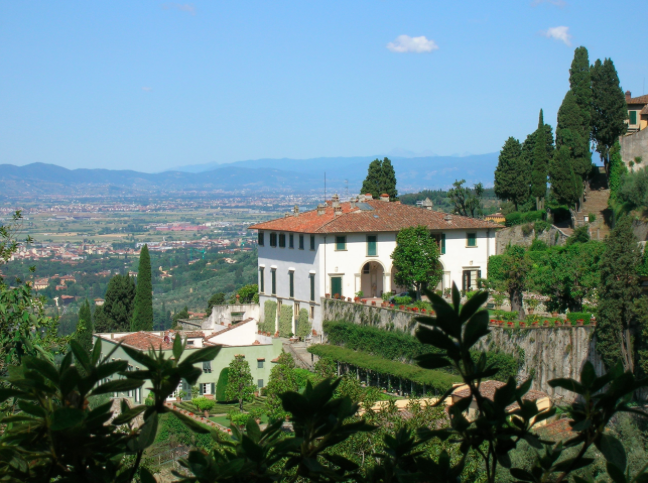 Needless to say, her life was one of privilege, comfort, and wealth. She eventually married Italian Antonio Origo and they bought a large estate in Tuscany about a hundred miles north of Rome. This move was puzzling to their social circles at the time.

“No one moved to the countryside like that, particularly not to such a ramshackle estate on a windswept hill, with no running water and – worst of all – no polite company.”

But the Origos didn’t simply happen upon this place in the Tuscan hills. Rather they chose this barren, desolate region on purpose. The couple had a plan for this land and after fifteen years of their care, attention, and hard work, they established fifty farms, a health center, and a school for 90 children.

I’ve only begun to learn about Iris but one thing that rings true in everything I read: her wealth was matched only by her compassion for the people who lived in the Val d’Orcia, the poverty-stricken area surrounding the estate. 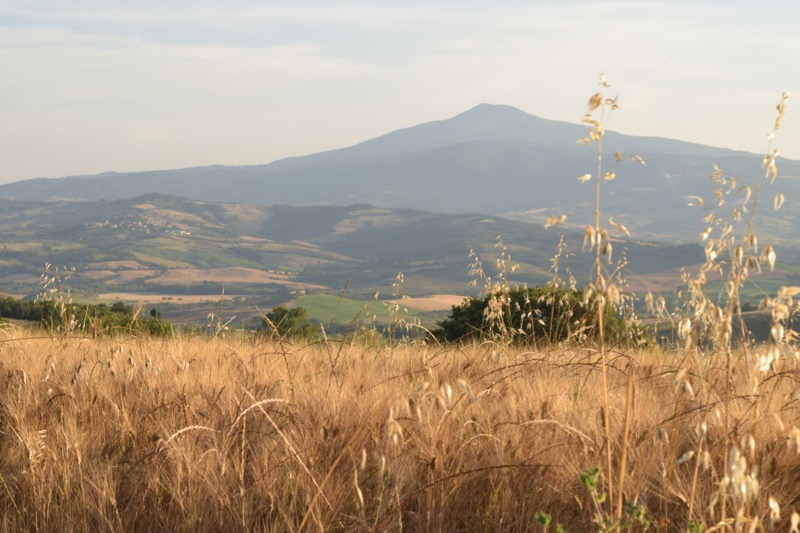 She and Antonio dedicated themselves to help these people, using their wealth and position to turn the barren, chalky landscape into thriving, farmable land. They rejected the ease and comfort of an aristocratic life in favor of long hours working fields, caring for the sick, and providing a refuge for children and escaped prisoners alike during the Second World War.

She was a woman divided on many levels once the war started, as her country of birth was at war with the country she called home.

In the midst of impossible times where she didn’t have the luxury of knowing how this war would turn out, she seemed to remain fiercely loyal not merely to home or to country but to humanity. To health. To care.

She served the people in front of her, from the children given to her care as well as the escaped prisoners seeking refuge. 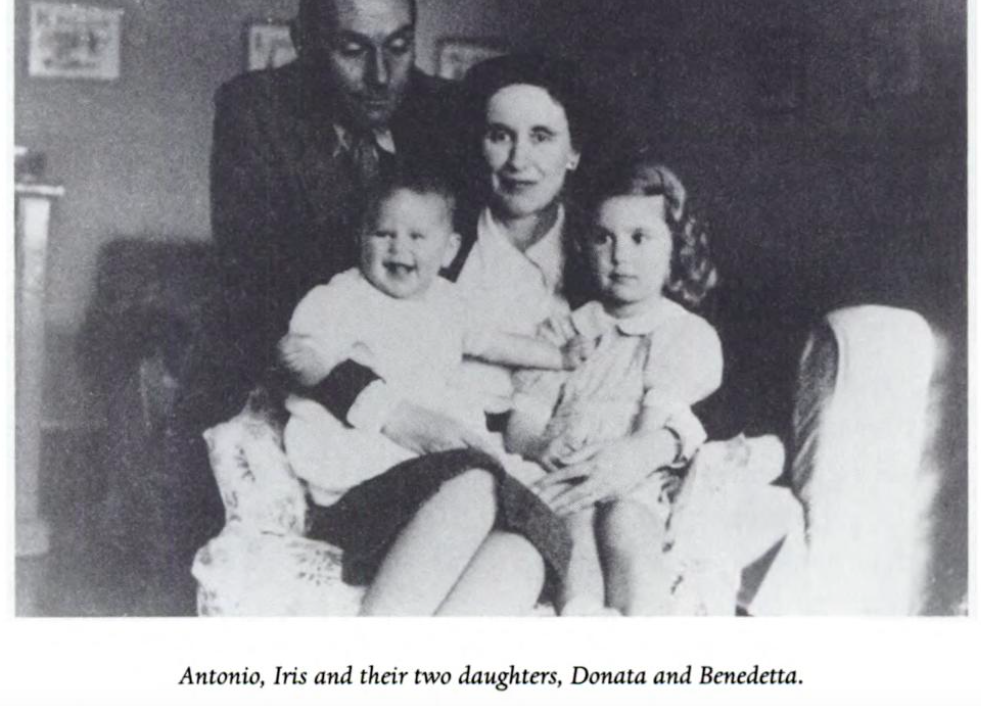 There’s a lot more to their story but what buried itself into me is that they chose this life out of a thousand choices otherwise – to build the valley where they lived, to invest in the people around them, to cultivate hope from the ground.

And now I’ve seen it with my very own two eyes.

Because that large, crumbling estate they bought back in 1924, the one overlooking the desolate Val d’Orcia?

This is where we stayed all week in Italy. 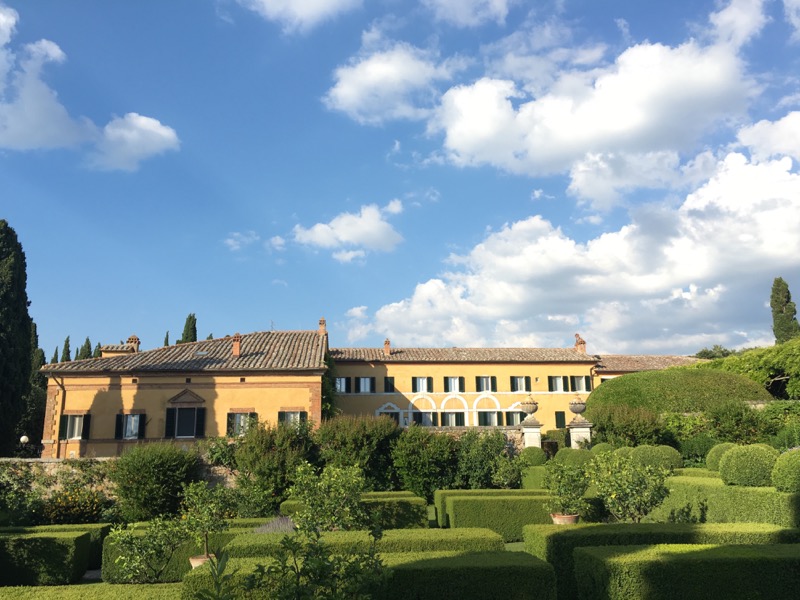 La Foce, home of Iris and Antonio, shelter to orphans, refuge for prisoners, school for the learning, symbol of hope.

Now it is neither crumbling nor desolate. And I can’t get over it.

The walls of La Foce hold secrets they’ll never tell. Lucky for us, Iris tells some of them herself.

Oh did I not mention? Iris Origo was a writer.

“We live on a large farm in southern Tuscany – twelve miles from the station and five from the nearest village. The country is wild and lonely: the climate harsh. Our house stands on a hillside, looking down over a wide and beautiful valley, beyond which rises Monte Amiata, wooded with chestnuts and beeches. Nearer by, on this side of the valley, lie slopes of cultivated land: wheat, olives and vines, but among them still stand some ridges of dust-coloured clay hillocks, the crete senesi – as bare and colourless as elephants’ backs, as mountains of the moon.”

I’m feeding my casual obsession with Iris by reading her diary written between 1943-1944 from this very estate, War in Val d’Orcia. 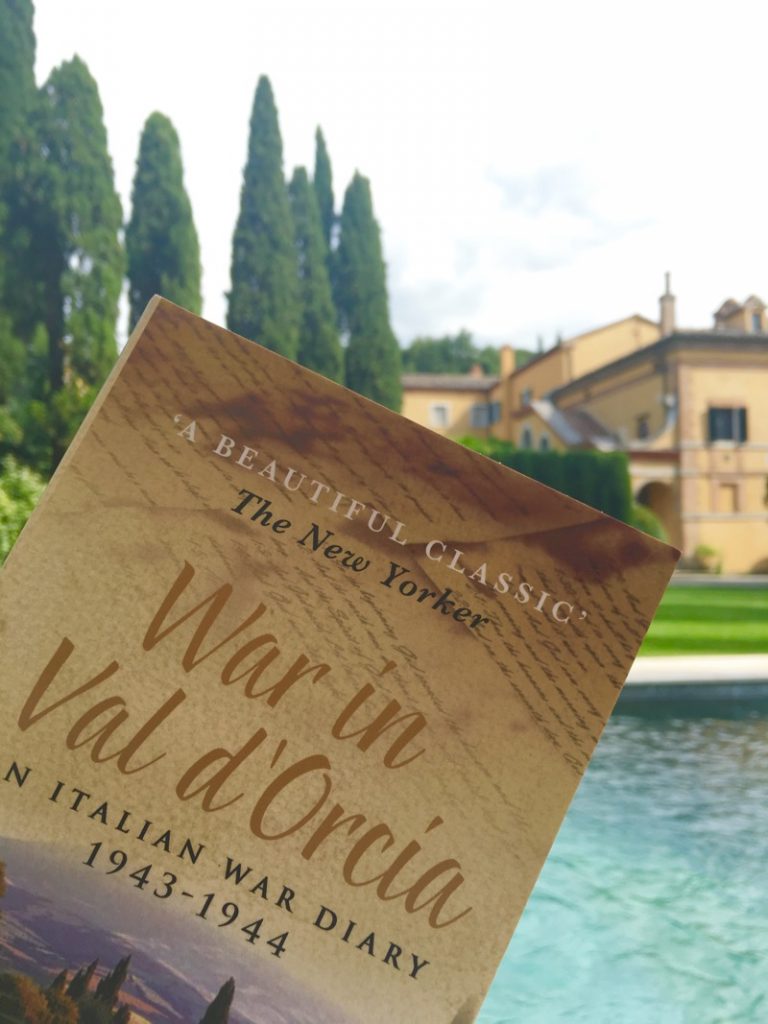 John and I stayed in what I think may have been her bedroom and I got ready each day in her dressing room and even though I know the house has changed since she lived there and the Germans destroyed all the furniture when they took over the estate for a time during the war, it’s not so different in the end.

Because these are the walls. This is the land. Here was her view. The house still reflects her heartbeat. 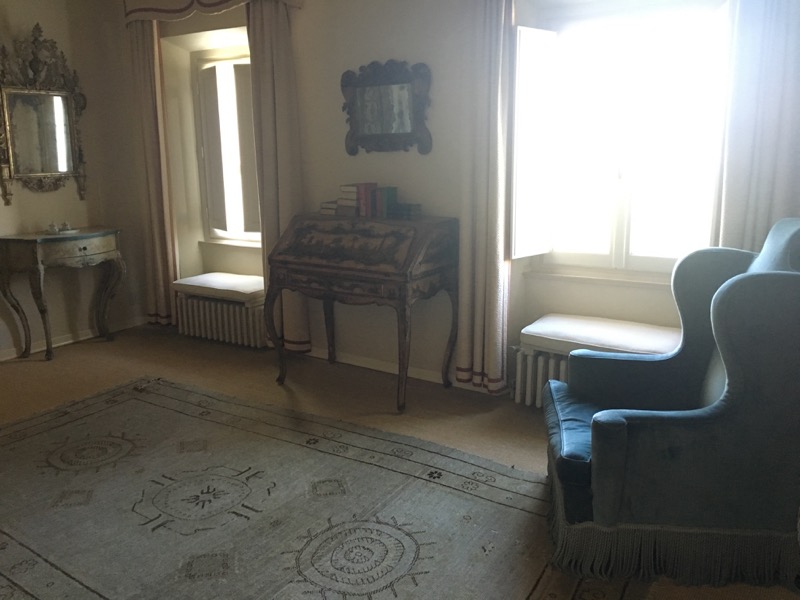 Early one morning, I made my way to this spot overlooking the valley. 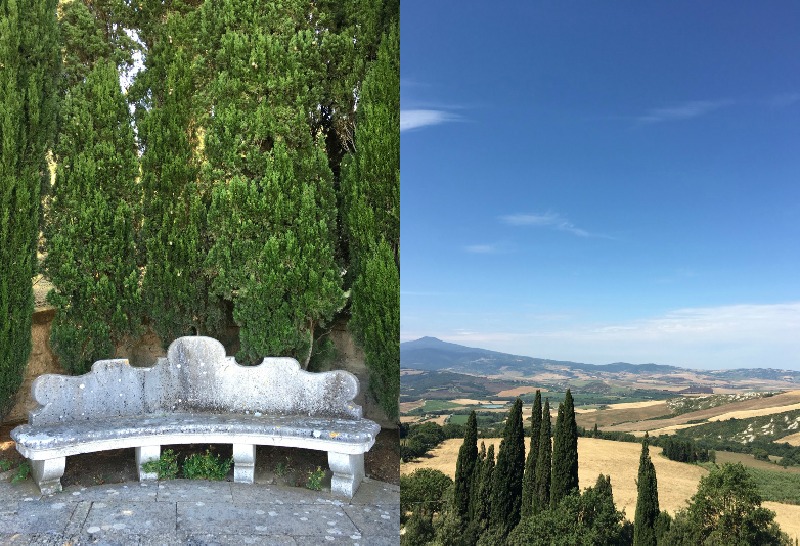 I thought about how God often gives us a hopeful vision of things to come before any of it makes sense.

I thought about what happened after John quit his job.

I thought about Iris and Antonio, how they had a vision for this “wild and lonely farm in southern Tuscany.” I thought of her care for the people and how they took the time to see that vision come to be.

They respected their place. Their service was specific, local, and committed. And it took time.

Still after all that, after years of care, they couldn’t stop the war from coming to their doorstep in the spring of 1944. They may have chosen this life in this particular place, but they could not choose their circumstances. None of us can do that.

“Awakened at six-thirty by planes circling low above the house. We wonder if there is a column on the road, and if so, whether it, and we, will be bombed together.”

Eventually, they had to evacuate.

“I took a tiny case, which we had in the cellar, contacting a change of underclothes for Antonio and me, a pair of shoes, some soap and eau de cologne and face powder, my clock and Giorgio’s photographs; and that is all we now possess. Each of the children carried his own coat and jersey. The grown-ups each carried a baby, or a sack of bread. And so, in a long, straggling line, with the children clutching at our skirts, half walking, half running, we started off down the Chianciano road.” 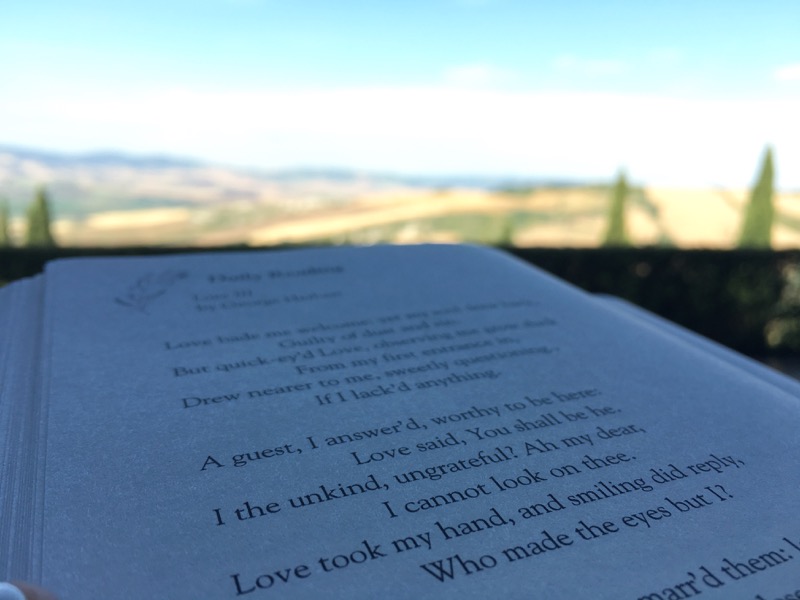 As I reflected on the reading for the day, I looked down at the bench next to me where my pen rested near my notebook.

All week I’d been using this cheap pen from my bank back in Greensboro. I brought it on purpose – the ink flow is consistent without being so thick that it shows through the paper on the other side. But that cheap pen with the name of our bank stamped on the side was a reminder of my own place, my own home and assignment. 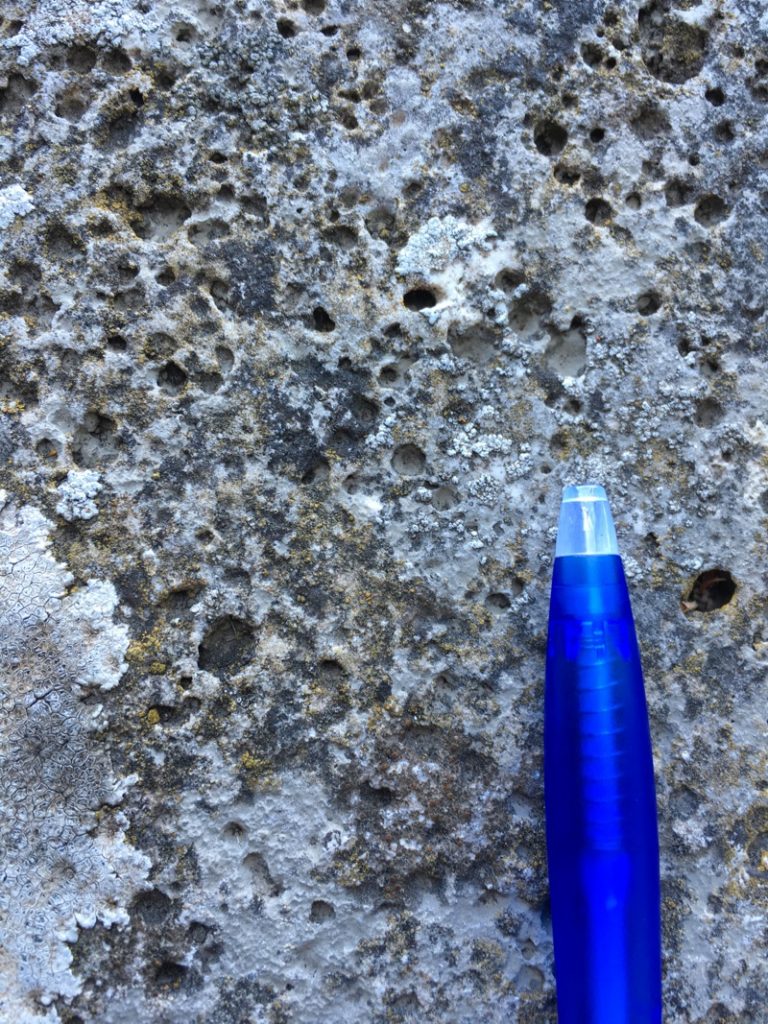 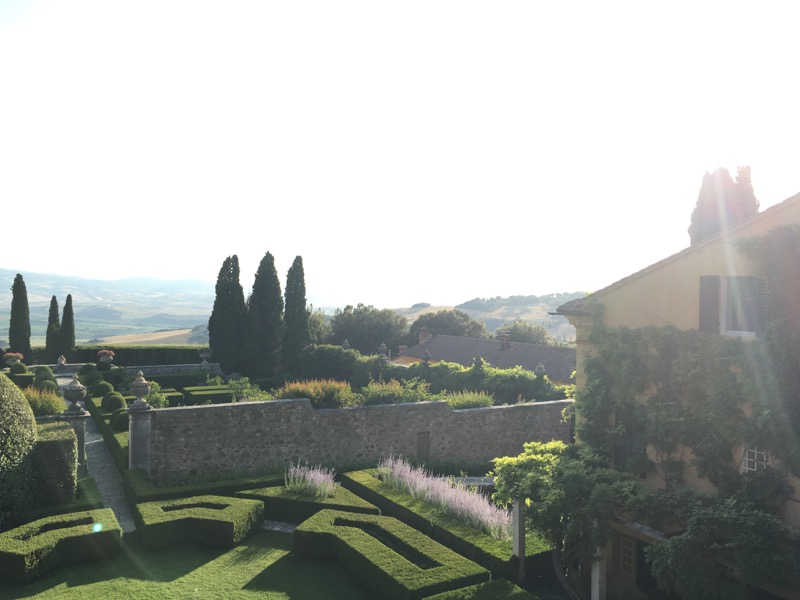 Iris had her place and I have mine. She didn’t allow her helplessness to harden into hopelessness. For these 10 days, stepping briefly into another woman’s story helped me to see my own life more clearly and from a slightly different perspective.

She carried a hopeful vision to restore the land outside her window, to serve the people who came to her door, and to stand up for the rights of humanity no matter which side of the war they were on. 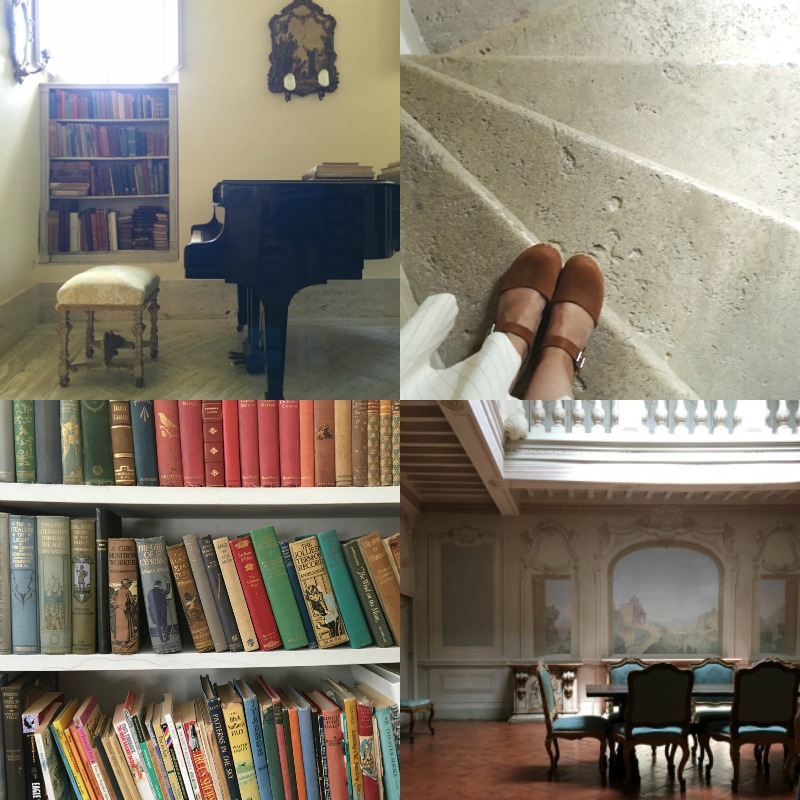 I warned you this post won’t have much of an ending. I thank you for traveling with me anyway.

Sitting in my sunroom in North Carolina, the phrases remain as I consider the state of the world, the heartbreak of humanity: Have mercy, Lord Jesus. What can we do?

Some half-thoughts come into my mind.

Our hope is in Jesus and his life is in us. What will we do?

And when we feel ready to say words, we pause and listen some more.

It might seem passive and counter-productive, but it isn’t.

And as we listen, we continue to, as our pastor Todd Jones said this Sunday, “practice faithful presence.”

We release the right to be understood.

We seek to understand.

We remain small as children of God, knowing our identity and affirmation comes from Him.

We affirm the dignity and humanity of others.

We receive the compassion of Christ so that we may hand it out in abundance.

We look for the barren ground and make plans for cultivation – both the kind outside our doors and the kind within our hearts. 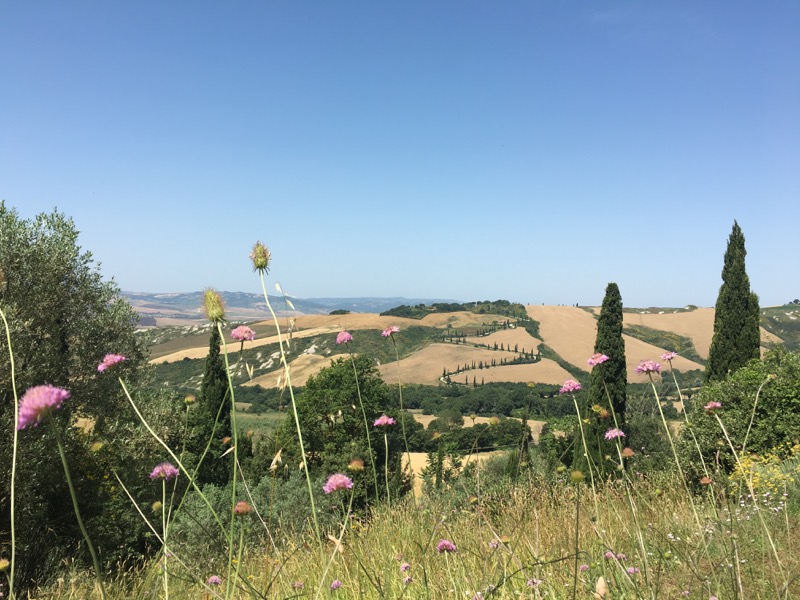 I confess lately I’ve been practicing impatience with my own slow-processing personality. This serves no one.

Instead, I’m continuing to learn what it means to let slow do what slow does best – nourish, strengthen, and grow.

When tragedy strikes, things we know to be true don’t stop being true even if the shock of it shakes the truth right out of our hands.

But truth is still true.

Seeds grow in the dark.

Circumstance may be out of our control, but our response isn’t.

Before helpless turns to hopeless, may we be willing to listen before we speak and do the next right thing in love.