because it’s never all about her 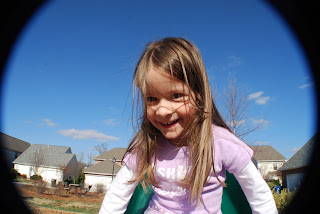 I’ve been thinking a lot lately about parenting and how we only get one shot. The girls go to preschool a few times a week now and that means the baby and I get lots of time together, just us. And I’m beginning to reap the benefits of that, as I notice my fuse with him is much longer than with his older sisters. I don’t like that. But it has reminded me to notice the girls as individuals and to see them as they are, not as I think they should be.

And so I look at her to see her and not just to hand her a juice. She is one of two, shared a womb, a birthday, then a crib, now a room. She answers to “Girls!” and hardly ever gets a parent to herself.

She thinks that the Prince is Cinderella’s daddy. She has to kiss me on both cheeks and hug on both sides when saying goodbye. She likes long hair. She could play pretend by herself for hours. She refuses to wear hair clips because she’s convinced they’ll blow away. She won’t let toys float in the bathtub because she’s afraid they’ll go down the drain. She likes carrots and loves to dance, though not in public. She is girly and dainty, feisty and sweet, and is crazy about Diego. And she’s looking more like me everyday.

She is our first-born…our only child for 2 minutes. And then her sister came following quickly after and she’s been sharing her world ever since. I am so thankful they have each other…what a blessing to have a sister who is the same age to play with now and to depend on later. But there are challenges that come with the blessing and I want to learn creative ways for them to feel special and separate as well as having a strong relationship with each other.

So this is a step for me…to focus on one at a time. To receive from the Lord a holy imagination concerning them and who He has made them to be, both now and later. So here’s to you, sweet girl. Thanks for sharing the spotlight.