The life of my grandfather was one of discontent. An often grumpy man, his days were filled with the sound of his own mumbled complaints muffled only by the mind-numbing applause of The Wheel of Fortune. It seemed there was little that pleased him.

He smoked brown cigarettes, long and thin and drank all his life until he realized he was an alcoholic and decided to quit. He became extremely active in AA and had a few years of sobriety before his body betrayed him, worn down from years of alcohol abuse.

Even in the midst of his cloudy unhappiness, I believe Grandpa enjoyed his grandchildren. Every now and then, Grandpa picked us up from school in his faded yellow car. My sister and I sat on the cracked vinyl, hot in the back seat and made awkward conversation with him, painfully aware of the generations that separated us. Upon arriving at his house, Grandpa would lead us into the kitchen, push the permanent piles of mail and newspapers aside and offer us a snack: two hard cookies, brown on one side, yellow on the other with white cream in the middle. He would then burn the popcorn and season it with Krazy Mixed-Up Salt, served up in plastic bowls.

It seemed to me that he tried hard to make us feel comfortable. I felt guilty for wishing he would just give us a Popsicle or a cupcake. So I ate, compelled to action by an internal sense of compassion and pity that I didn’t understand.

Surprisingly, Grandpa was one person who encouraged me in my writing. Maybe underneath the alcohol and layers of hurt and damaged relationships, he was a writer himself. I don’t know that to be true, but it could have been, I suppose. 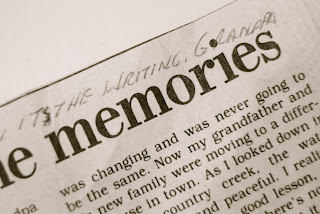 For my birthday, he gave me two magazines on creative writing. I still have them somewhere. He also cut an article from the local paper about a girl my age who had won $25 in a writing contest. I assumed he thought I could do something like that. He folded it carefully and sent it in the mail, writing in capital letters: Emily, It’s not what it says, although that’s important. It’s the writing. Grandpa.

I still have that, too.

I don’t know much about the demons that haunted my Grandpa all those years. I don’t know what caused him to make decisions that would bring pain and heartache into the lives of those he was called to protect. The way I see it, he didn’t know Jesus, didn’t cherish his wife, and never learned how to show affection. Had he made different choices, his legacy could have been beautiful and life-giving. But in the midst of his confused priorities, he chose to see me, even if only in part. He noticed me even though noticing people did not come naturally for him. He appreciated my writing and encouraged me to do it often and to do it well.

Is encouragement coming from an unlikely voice in your life? Sometimes its hard to see the good when the bad hurts so much. But it is sweet to realize that the Lord uses all types of people in all kinds of ways to inspire courage within us.