a sweet cup of no expectations

I wanted to make the packet kind, Swiss Miss with mini marshmallows. But somehow I’d accidentally bought the mocha cappuccino kind of packets and I didn’t think giving coffee to my already-snow-crazy kids would be the best idea. So I pulled out the tin of Hershey’s cocoa and made the kind from the back with the dash of salt and bit of vanilla. 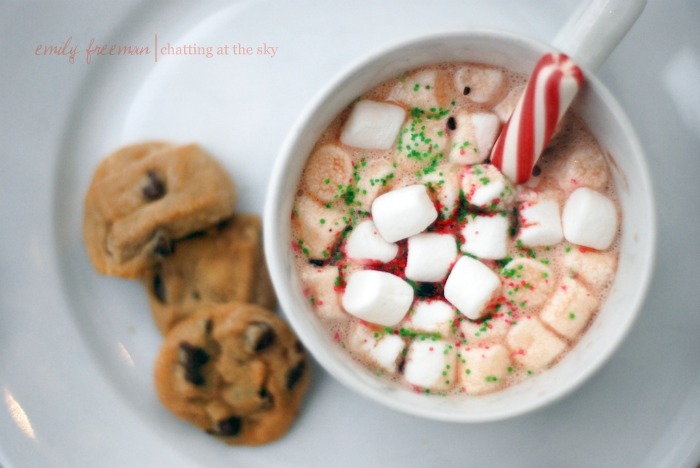 I don’t know if it was the snow falling fast or the peppermint sticks I got from Wal-Mart for 87 cents, but it was the best cup of  chocolate I think I’ve ever had. Definitely the best I’ve ever made. It could have also been the fact that I didn’t expect it to snow anyway and the whole day was a blessed gift.

As I went to bed last night, I thought about all the happiest days of my life and all the spectacular ones came to mind. Our wedding day was happy because of what it represented, but there was so much expectation hovering around that day that it’s hard to give it that legit label. The day the twins were born was miraculous and joyous, but I weighed nearly as much as my 6 foot 3 husband and they came out way too early so there was lots of fear and tears and worry weaving itself through that happy day.

We’ve had a lot of great vacations together, from our honeymoon trip to Maine when we were wide-eyed and sun-kissed, to our family trip to Disney last year when every moment was magic. Ish. But those were so built up, so planned for and looked ahead to, that it was hard to simply go with the flow when the flow wasn’t on the schedule.

And then a memory came to mind when I was pregnant with the twins, but no body knew they were twins yet. The Man and I went in for a routine appointment to hear the baby’s heartbeat, and the edges of our nervous excitement quickly shook jagged when she said she couldn’t find one. And so we walked foggy-like into the dark ultrasound room and waited. And when she put that cold wand on my tummy, peered close to the screen and turned it our way, she calmly said to us Well, you aren’t eleven weeks after all. You’re only seven. And there’s two. Two what? Two babies. There are two babies. You’re having twins! Congratulations!

And nurses gathered in the hallways to look at us and the doctor came in and pointed at the screen Ahhhh, that explains it! and I had visions of two car seats and matching outfits and my husband couldn’t stop laughing. And we somehow made it from the exam room to the car when we realized, twins. And the best part was yet to come because now we got to tell everyone. And we’ve never had so much fun. It was one of the purest, happiest, days in all my life. Terrifying, but only vaguely. I never expected it in a thousand years.

I think that’s part of what makes most of the happy days happy. Unexpected gifts. Snow before Christmas. Hot chocolate with vanilla. Telling the family there’s two! What was one of your happiest moments?

If you need help to catch your breath, sign up here for Still Moments, a week-long audio devotional I designed to help you create space for your soul to breathe in less than five minutes a day.