Larry Crabb tells the story of how his wife was abused as a little girl but he didn’t know it until many years after they had been married. When she finally felt safe enough to share the truth with Larry, she cried as she spoke because it was so painful. 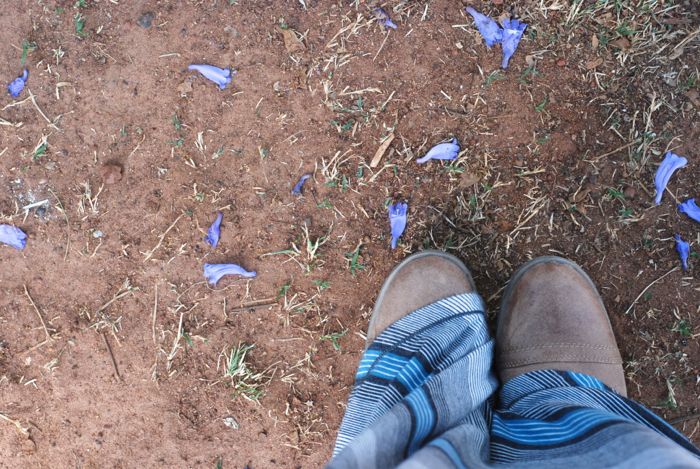 But Rachael told Larry another story of when she was a young girl, about an adult in her life who truly loved and cared for her. He treated her with kindness, with respect, with compassion. When she shared this story for the first time, she wept. She sobbed, shoulders heaving, unable to control the overwhelming memory of being seen and loved as she was.

I tell people all the time to pay attention to what makes them cry. Not because it unlocks some kind of deep secret meaning of life, but because it simply helps connect us to the deep, secret parts of ourselves. When something moves you enough to bring tears, lean in and listen up.

Yesterday after I met our family’s newly sponsored child, Otwii Paul, our team split up into three groups to visit homes of the children enrolled in the child sponsorship program with Compassion. Shaun and I went to visit the home of eleven year old Colline. 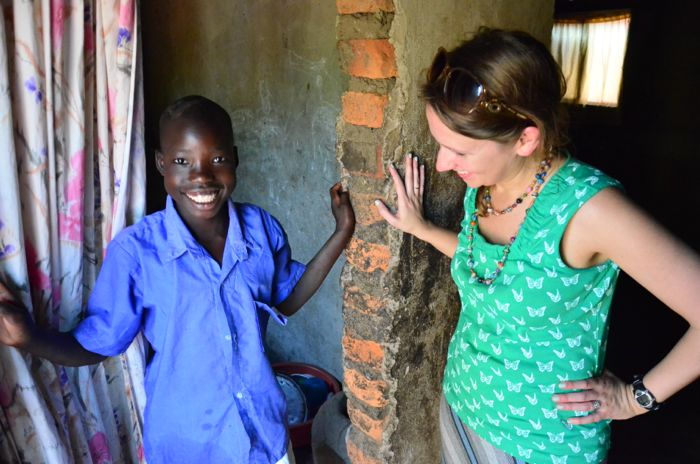 We sat in a half-circle under what I’m pretty sure were banana trees, chairs lined up neatly on the cleanest dirt I’ve ever seen in real life, and listened to this family’s story. 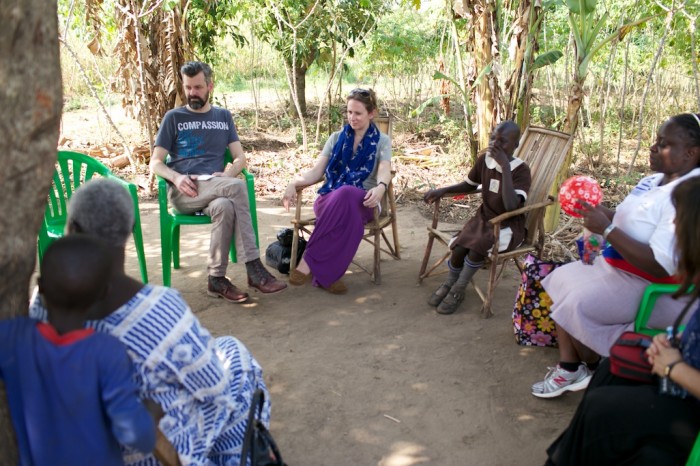 Colline’s uncle Richard was gracious enough to sit with us yesterday and share their story of escaping the rebels who captured and killed his brothers, including Colline’s father. He was willing to tell us about how they hid in the bush to stay alive, how they would push the children under the grass so they couldn’t be seen, and how the children knew not to make any noise. Besides, they were too hungry to make much noise anyway, so they spent the days sleeping, hiding in the bush.

He told us the story of how he and his wife decided to take Colline into their care even though they already had four children of their own.

It was a hard story and they were gracious to tell it. But I didn’t cry while I listened to it. It was almost too sad to comprehend, too distant to connect with, too hard to imagine this family hiding to save their lives while we sat safely under the banana tree beside the house Richard built with his own hands. 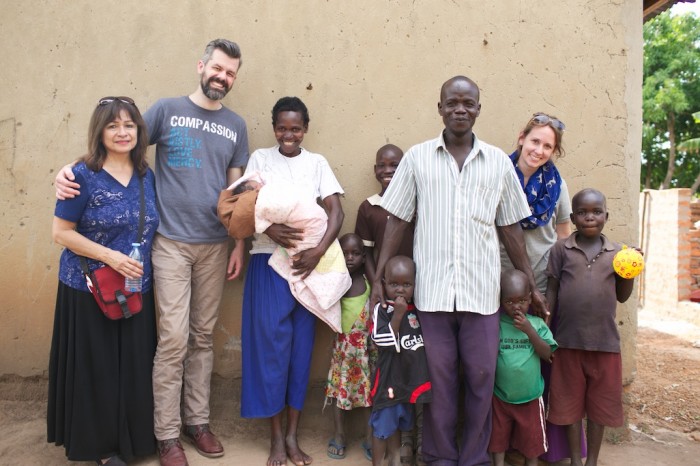 Today, we went back to their house curious now to simply see what Colline’s daily life looked like and how Compassion helps to make it better.

This, evidently, is hilarious. Because when the translator told Richard what we wanted to do, he broke out laughing.

I guess when you don’t watch reality TV or instagram your pretty lunch plate or know about taking selfies and whatnot, it’s a hard concept to grasp.

He was gracious to share the devastating story. But he didn’t see the point of telling the daily one. 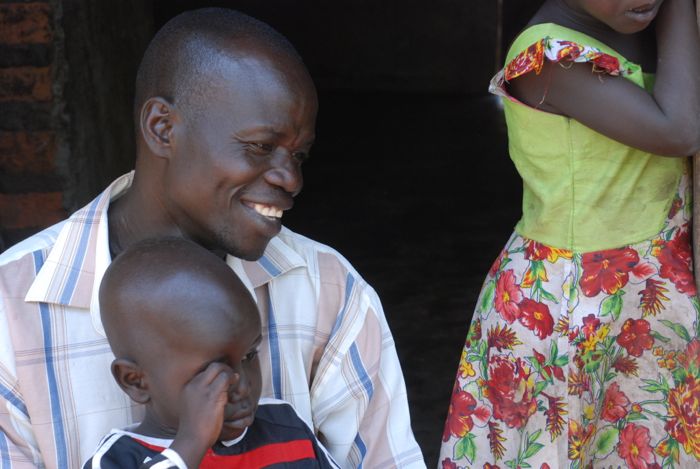 “You know,” he says through a translator, “just whatever you all do during the day, do that. And we’ll help or watch or whatever you want. Dishes, laundry, cooking. We just want to see daily life a little bit.”

The small stuff. The little things. The everyday rhythms.

Again, hilarity ensues. Why do these crazy white people want to see us do our laundry? He said with his eyes. (He was too polite to say that with his mouth.)

Finally, someone convinced this family we were genuinely interested in understanding a bit more about their daily life, they began to catch on. Maybe too much, actually.

Because Colline began doing the chores she normally does early in the morning, chores that had already been done by the time we arrived.

Part of me wanted to stop her – no, just do what you do! It’s okay! Don’t wash clean dishes! Don’t pretend to peel potatoes!

But it had gone too far by this point.

So we followed as she walked us through her daily chores.

She washed her siblings faces. 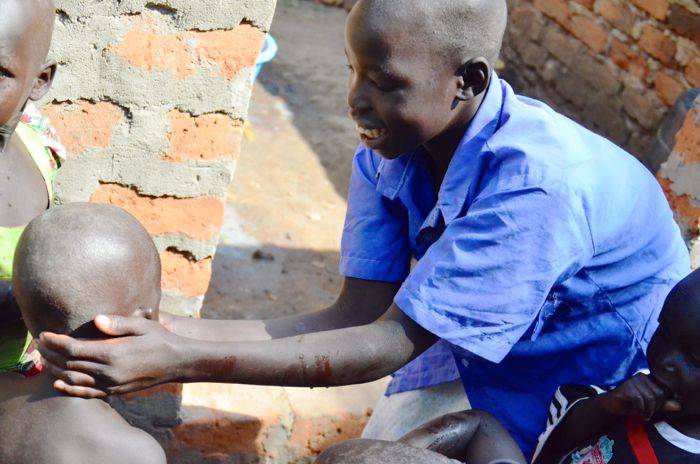 She swept the ground in front of their home with a broom she made herself. 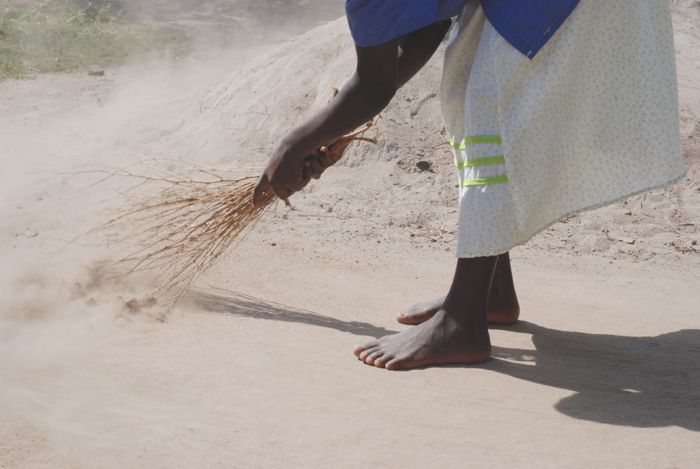 She took us to the place where she gets water. 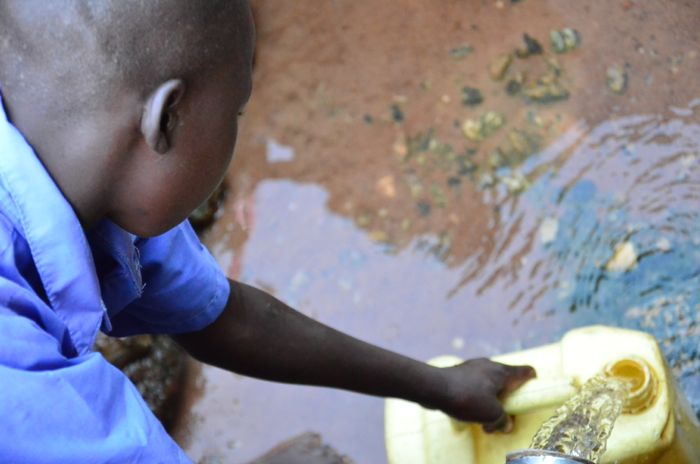 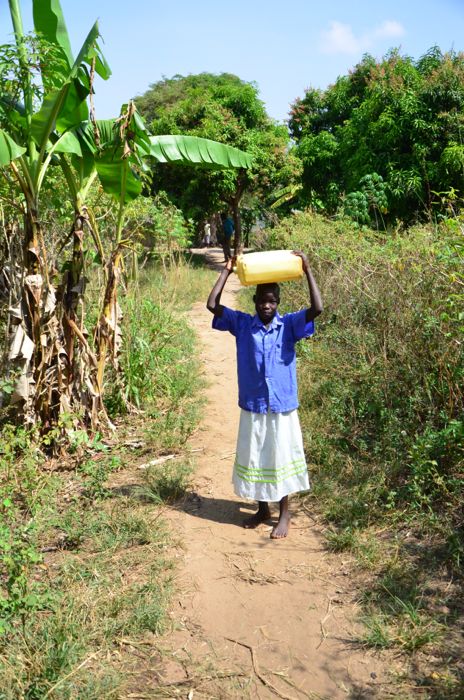 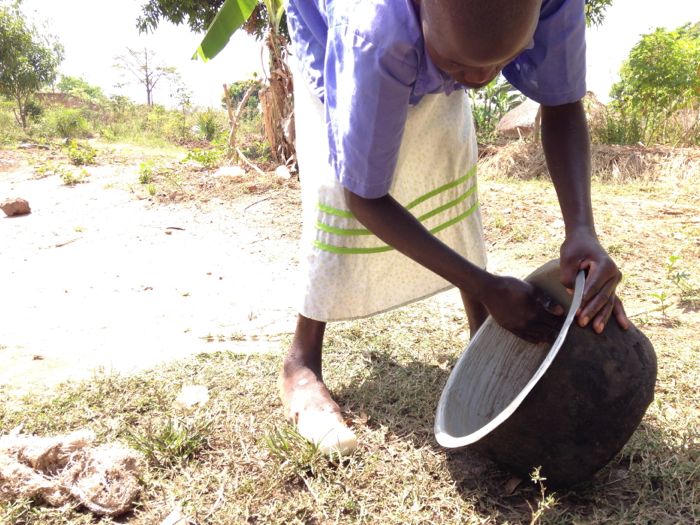 Then she disappeared for a while and when she came back, she had on her school clothes even though it wasn’t a school day. See, this is how I go to school. This is how I dress. These are my school shoes. She walked ten feet down the path and then turned around and came back again. 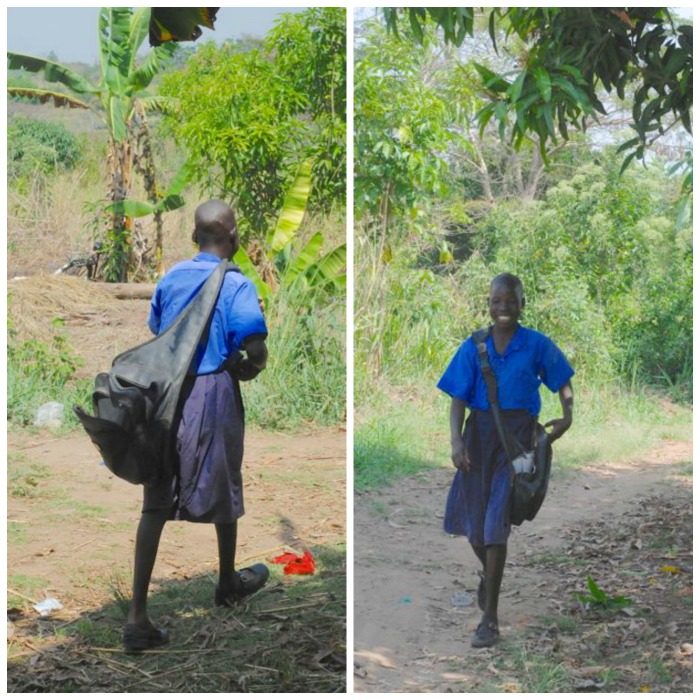 And then? She changed back into her everyday clothes and made herself an after school snack. For after her pretend school day. And here she is praying before she eats it. 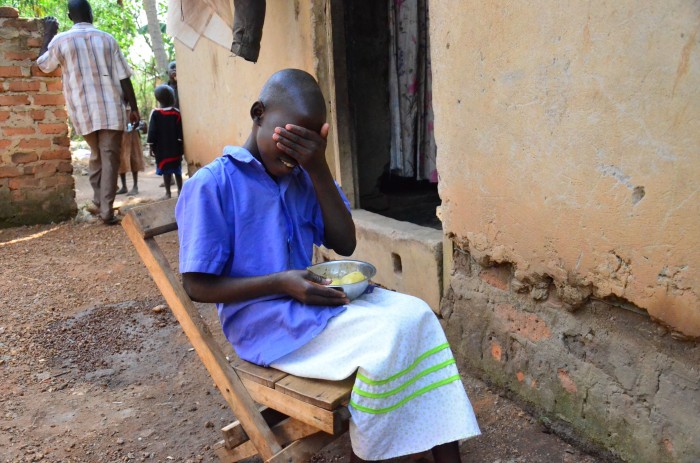 I think she was having fun. 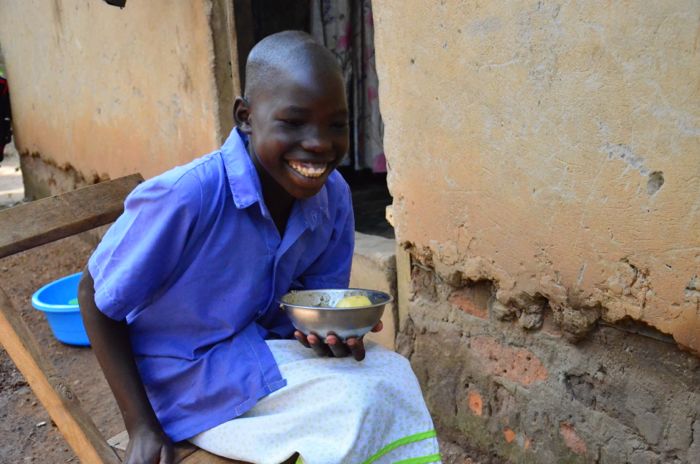 She seemed to take pride in showing us her life in this small way. Instead of us just jumping in on a dish-washing or a laundry-hanging, we got a feel for the whole day in a matter of hours.

It was a simple day, a happy day. It was a day spent with this family of seven and about twenty other children from the village who came to basically look at us because obviously. None of these children are part of the child sponsorship program – only Colline.

If you lined them all up and included Colline in the mix of them, I’m pretty sure I could pick her out on the first guess. 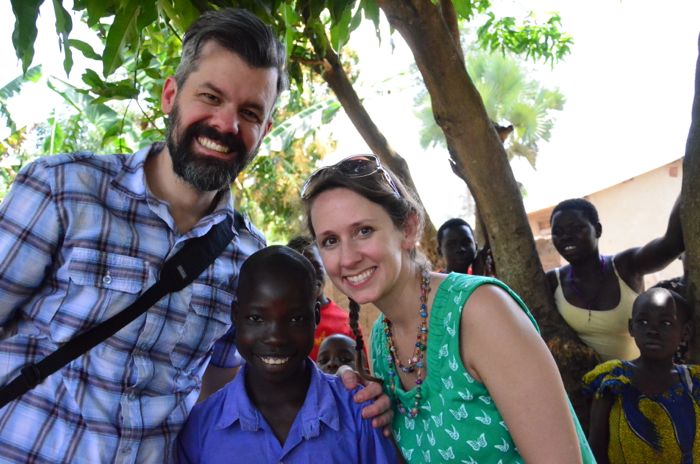 When Colline first began in the program in 2009, she didn’t interact well with others, had poor health, and nightmares at night.

Because of the support of her sponsor, she gets a pill every six months that keeps her from getting lesions like the ones I saw on some of the other children.

She has a project overseer who prays for her every Monday and Thursday to keep the nightmares away.

She has a mattress to sleep on, a kerosine lamp in her house, a barrel they use for storage in the kitchen.

She is able to go to school (even though the public school tuition is one third of Richard’s salary) because Compassion pays her school fees.

Colline also has a fun, safe place to learn about the Bible every Saturday at the church where the Compassion center is located, adults who know and care for her, and the dignity that grows naturally in a child who has hope for her future.

She is clearly comfortable interacting with others.

And even though Colline is the only child in the family registered, the whole family benefits from her sponsorship. 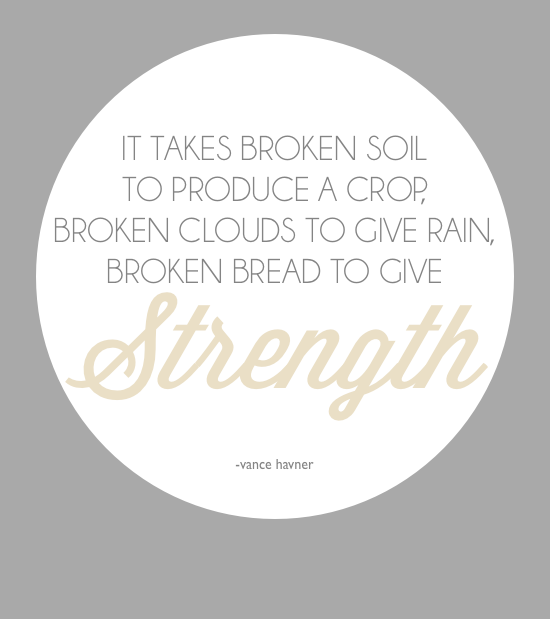 You want to know the only time I teared up today? It was this, captured in this 1:45 second video (subscribers click here to see):

The only time I teared up today was when Shaun started speaking to Richard, Colline’s uncle – words of encouragement, hope, and support from one father to another. (He wrote a post about our time at Colline’s house today, too.)

Even though I heard Richard’s devastating story yesterday, I didn’t tear up when I heard his pain. I teared up when I saw his hope.

“One changed child eventually changes a family. A changed family will influence change in its church. Enough changed churches will transform a community. Changed communities change regions. Changed regions will in time change an entire nation.”

Wess Stafford, Too Small to Ignore

It starts with a child.

I know there were twenty other children in the yard today who don’t have sponsors and aren’t registered with Compassion. Richards own four children were among them. But having his niece sponsored benefits not only his family, but his whole neighborhood.

Colline is learning to be a leader right where she lives all because of a sponsor who decided to partner with Compassion for $38 a month to change her life for the better.

Would you be willing to join Compassion in rescuing children from poverty in Jesus’ name? Would you pick a child to sponsor today?

The Meaning of Life in Three Parts by Jeff Goins

How to Have a Happy Home by The Nester

What it Means to Boil Water by Joy the Baker

What Good Dads Do by Shaun Groves

Thank  you for reading these posts. Thank you for sponsoring kids. Thank you for your gracious comments, prayers, and understanding when I get a little crazy over tiny airplanes (which we load our big selves into again tomorrow morning – that’s 3 am EST incase you want to set your alarm to wake up and get on your hands and knees and pray for the safety of our souls in real time. I digress.) You are a kind group of readers and I’m so glad you’re following, tweeting, and Facebooking along.

Now go pick your child and come back and tell me his name! Or her name, of course.