I was painfully shy in early elementary school. As in, other students would talk about how shy I was in front of me, teachers would ask me to speak up because they couldn’t hear me, and I had one friend, Tara Cooper, who was even more shy than me. That was how I would be for the rest of my life as far as I was concerned. 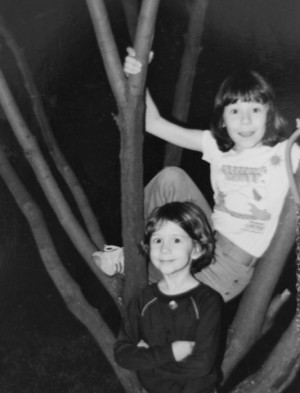 I grew up half a block away from the hospital where I was born. My grandparents house was a mere four minute drive down 17th Street into Hiker Trace, behind Marr Road and Columbus Shopping Center. Every 4th of July the family would gather in their backyard, the grown ups in lawn chairs, my sister and I climbing trees and chasing lightening bugs, always with one eye on the sky above the JC Penny’s parking lot, waiting for it to get dark so the fireworks could start.

But in the fourth grade, our parents let us know that we would be leaving Indiana and moving to Iowa, six hours away from Marr Road and Hiker Trace and Tara Cooper and the McDonalds where I got my first happy meal. And so when I was a girl preparing to leave everything known behind, it seemed the antidote to my fear was courage; courage to say hello even though they already knew each other, to try out even though it seemed like a waste, to walk with my head up through the cafeteria even though I had no place to set my tray. Courage plus a little bit of gumption and a lot of bubbly sweetness made it so that during my teenage years when my family moved to several different states several different times, I was never lacking friends. Back then, courage was enough.

But now? The opposite of fear doesn’t feel so much like courage. It feels bigger, fuller, more important. It feels more like life. When I’m living in fear, I’m barely living. Rather, I’m hiding out, I’m waiting through it, I’m wishing things to be other than what they are. I can’t receive hope, I can’t embrace truth, I can’t feel freedom. I can only cower with my eyes shut tight. I need courage, yes. But when I find it, it feels like so much more than just brave, it feels like living.