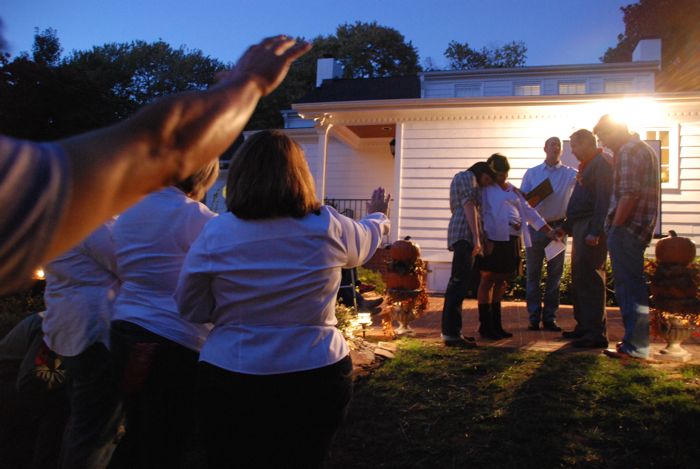 This photo has harsh backlight and it’s a little blue-blurry. But it captures everything I hoped it would when I snapped it. And more. That’s Gary there to the right, with the red bandana. He’s holding Sandra’s hand. Their daughter is there, her head on her mom’s shoulder and that’s their son in plaid on the other side.

Gary and Sandra have been married for 25 years. A few weeks ago, they renewed their wedding vows in her parent’s backyard in front of a small group of friends and family. During the prayer, those of us gathered there to re-witness their promise to one another held up hands of blessing toward them as they bowed their heads.

When you’ve been married for 25 years and still want to renew your vows, you know what grace is. You may not be able to put it in a sentence, but you’ve lived it. You have to.

I’ve only been married 9 years, so to write about marriage after so short a time feels a wee bit naive. My parents have been married 37 years. My in-laws, 49. So many years. So much love. So much hurt. So much forgiveness. And there is so much to say about what grace is in marriage, how showing it makes all the difference, how receiving it can change the world. But I think I can sum it up in one sentence, one thought, one solitary take-away:

You married a person.

So many of our troubles and disappointments can be traced back to the fact that I expect my person-man to be a God-man. I put expectations on my husband that are meant for God alone. And when he, shock of all shocks, can’t measure up, I am hurt and angry and wallow-y.

So that photo at Gary and Sandra’s vow renewal ceremony? It brings me to tears, because it says without words: This love-life is impossible without a source outside of ourselves. This grief-stricken, joy-filled, longing-for-heaven life together exists because God does, and to make it work is to trust in the one who came up with it in the first place.

Does this ring true for you? How have you experienced grace in your marriage, or witnessed it in the marriages of those around you?