Some of you may have noticed that I had a birthday yesterday. Last year, I turned 30. I dreaded it while I was 29. Then, when the actual day came, I realized I kind of liked 30. Granted, there was that ginormous surprise party thrown on my behalf. That helped. But I also realized, as the days and weeks passed, that I finally sort of felt like a grown up. And I liked that.

This year has been different. I am sick, for one thing. And we are moving, for another. This one kind of crept upon me from behind while I was packing boxes and blowing my nose, tapped me on the shoulder and in a slightly annoyed voice said, “Hey. You’re 31 now.”

It seems like once you finally feel grown up, you should get to stop having birthdays. But they just keep coming. One after the other. Every single year. It isn’t as fun as it used to be.

One thing that did come from this birthday was a visit from The Nester. She has a name, which I won’t reveal, of course. It’s funny though…The Nester has kind of grown on me. I call her that a lot now when we’re together, especially when we’re talking house. And we talk house a lot. She helped me pick this out. 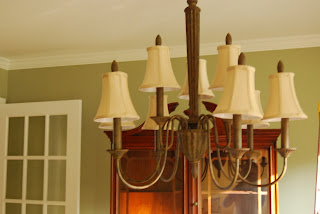 That one is in our dining room. She thanked me for letting her help me pick out light fixtures, stating it was the most fun she’s had all week. Or was it all month? The walls are svelte sage, for those of you who may wonder. We have six nights left until we move to the new old house. I think I’m ready. I still haven’t shown you the kitchen. I inherited some nice cabinets that I wouldn’t have chosen if it had been up to me. But we couldn’t replace them. So we’ve done some other things to make it ours. I look forward to posting about that.

But first I have to go pack up my current kitchen. And count the days ’til my next birthday. Or not.