I’m going to risk blast-from-the-past overkill and publish this post. That’s me at cheerleading camp the summer of 1992…just to help paint the whole picture, you know. Check out how high we wore our socks.

Thanks to those of you who suggested I post a list of the songs on one of the tapes I found. I have actually listened to a lot of them and have been rockin’ out to Violent Femmes and the Gin Blossoms all day as a result. So here it is: the following is a list of the songs on my 1993 tape in its entirety. Nothing has been added or deleted from this list. Key words: recorded from the radio.

Side A
1. Sting Fields of Gold – 2nd verse only
2. Spin Doctors Two Princes
3. Phil Collins Billy Don’t You Lose My Number – Dance Remix version. Yes. I know.
4. Phil Collins One More Night
5. Peter Gabriel In Your Eyes
6. Whitney Houston I’m Every Woman – 30 seconds only
7. Spin Doctors Two Princes – for the 2nd time. I really liked this one.
8. Crowded House Don’t Dream it’s Over – 2nd half only
9. Kenny G – I have no idea what or why.
10. The Ronettes Be My Baby – I went through an Oldies phase.
11. Gloria Estefan I See Your Smile
12. YWCA personal fitness commercial

Side B
1. Whitney Houston Where do Broken Hearts Go
2. Simply Red If You Don’t Know Me by Now – because it always reminded me of Alex P. Keaton and his girlfriend on Family Ties who ended up being his wife in real life.
3. Extreme More Than Words
4. 4 Non Blondes What’s Up? – the song where they don’t ever actually say “What’s Up?” It’s more like “Hey, hey, hey, hey, hey. Hey, hey, hey. I said Hey. What’s goin’ on?”
5. Sting Fields of Gold – Again, 2nd verse only.
6. Boys II Men In the Still of the Night
7. Whoomp! There it is – Does it really matter who “sings” this one? Couldn’t get all of Fields of Gold despite my two tries, but this one I have. In its entirety.
8. Lots and lots of blank space.

Somehow this tape missed my UB40 Can’t Help Falling in Love obsession. Not sure how that happened. 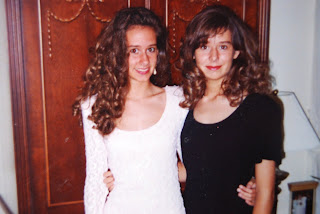 And here I am with the Nester in 1993. I’m the one on the left with the teeth. She’s got teeth, too. But mine were more important cuz I had just gotten the braces off. And it was prom night. Good times. Except for the fact that my dress was long sleeves. Covered in sequence. And it may or may not have had shoulder pads.

Ok. That is all. Overkill complete.