Last year I made a list of books I was looking forward to in 2016 and loved the practice so much, I’m doing it again. Heading into 2017, I haven’t signed another book contract (yet) and am enjoying, once again, the freedom of being able to pay more attention to the books releasing this year. 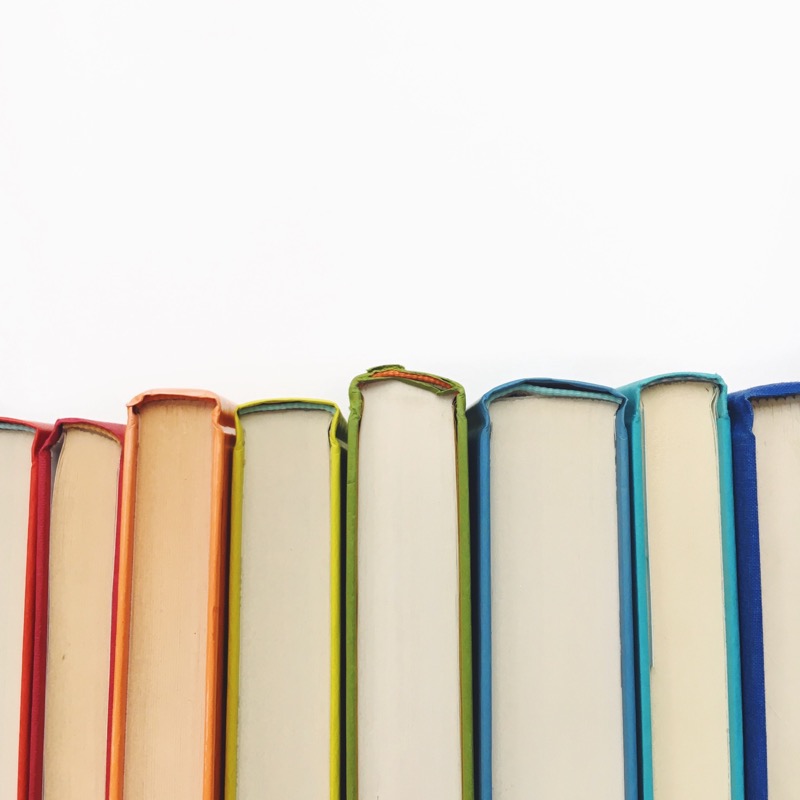 Here I’ll share 17 books releasing between January and June of this year in order of their release date. I’ve chosen these titles based entirely on my own personal interest.

Perhaps you’ll want to add some of these to your to-read list or, better yet, go ahead and give your future self a gift and pre-order.

We have a fun surprise in this list for you from me (hint: check out #17!)

Note: With the exception of three of these titles, this is a list of books I’ve not yet read, as they have not released. Two of them I have read early for endorsement and the third, well. You’ll see below. The rest I share based entirely on title, cover, description, and in some cases, what I know of the author.

I’m happy to include affiliate links in this post so if you pre-order a book from this page, I may receive a small percentage at no additional cost to you. Hooray for Amazon affiliates! 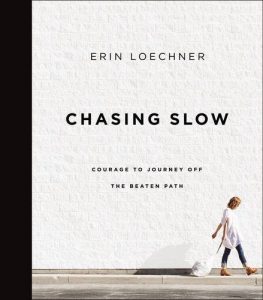 1. Chasing Slow: Courage to Journey Off the Beaten Path by Erin Loechner

Why I’m interested: I never saw her show on HGTV and I only started reading her blog in the last year or so. But every time I read her words, my soul feels hushed, understood, and at peace.

Aside from all that, even if I had never heard of or read a thing by Erin Loechner, I would be interested in this book based on the title alone. Chasing Slow? Yes please. 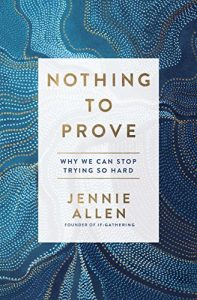 2. Nothing to Prove: Why We Can Stop Trying So Hard by Jennie Allen

Why I’m interested: The subtitle for my first book was Letting Go of the Try-Hard Life so I’m naturally drawn to any message that speaks to that truth.

When I saw this was the concept for Jennie’s newest book, I wanted to stand on my desk and give this message a standing ovation. I suppose this post is the internet version of an ovation. I’m grateful for Jennie’s voice and look forward to reading her perspective on why we can stop trying so hard. 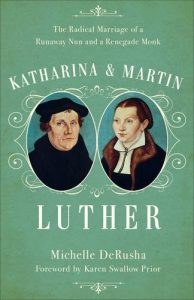 3. Katharina and Martin Luther: The Radical Marriage of a Runaway Nun and a Renegade Monk by Michelle DeRusha

Why I’m interested: This is one of the books on this list I’ve already read and it’s fantastic. First, I’m in awe of Michelle’s impressive attention to detail and research. Second, I just didn’t know that much about the runaway nun and the renegade monk.

We owe Michelle DeRusha a debt of gratitude for her impressive commitment to tell the story of this unlikely marriage.

P.S. I traveled to Tuscany with Michelle for a writer’s retreat this summer and can personally attest to her brilliance. Amen. 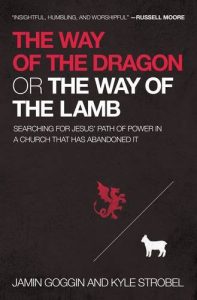 4. The Way of the Dragon or the Way of the Lamb: Searching for Jesus’ Path of Power in a Church that Has Abandoned It by Jamin Goggin and Kyle Strobel

Why I’m interested: Since before I wrote Simply Tuesday, I’ve been drawn to books that speak specifically to this tension between a thirst for power and a call to humility, especially as it shows up in the church. I’m fascinated by our fascination with power – both the kind I see around me in the world and the kind I find within myself, for better or worse.

P.S. again. We met Jamin on that same Tuscany writer’s retreat this past summer – he was our spiritual director. John and I are both so grateful for his keen insight and the kind way he listens before he speaks – a rare, admirable quality. 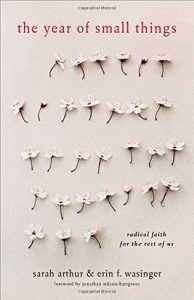 5. The Year of Small Things: Radical Faith for the Rest of Us by Sarah Arthur and Erin F. Wasinger

Why I’m interested: I’ve had Sarah Arthur’s At the Still Point on my wishlist for a while now and then received that book as a gift from a friend. This one caught my eye at first because of the title alone, as celebrating my smallness continues to be a theme in my life.

I finally added it to the list because of this, as well as the simple focus on how radical change in the world can start – must start – right where you are. 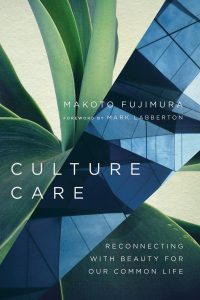 6. Culture Care: Reconnecting with Beauty for Our Common Life by Makoto Fujimura

Why I’m interested: For years I’ve watched from a distance the good work Mako Fujimura is doing in the world both as an artist and as a champion for the impact of art and creativity on faith and culture.

I’ve not yet read one of his books. But it sounds like this book could re-awaken the soul of our culture, reminding the artist in all of us the importance of stewarding and nurturing beauty and creativity now, both for the sake of one another now as well as generations to come. 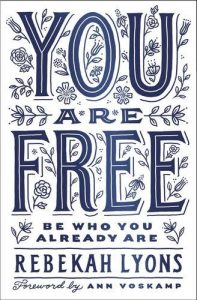 7. You Are Free: Be Who You Already Are by Rebekah Lyons

Why I’m interested: First, the cover caught my eye. It’s lovely! But then, that subtitle Be Who You Already Are sealed the deal. For years that’s been a statement I’ve repeated and shared, both to my readers as well as to my own soul.

When I see themes like this repeated in new books coming out it re-affirms that our friend Jesus wants us to know this one thing well and he’s finding all kinds of beautiful people and unique voices to share this sacred message. Grateful to Rebekah for writing this one and I look so forward to it. 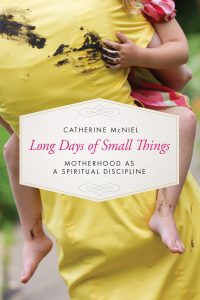 8. Long Days of Small Things: Motherhood as a Spiritual Discipline by Catherine McNiel

Why I’m interested: Once again, it was that word ‘small’ that first got me. And then it reminded me of that phrase we often hear as young moms the days are long but the years are short. My kids are older now, but back when I had three children two and under (three cribs! three in diapers!), I always scoffed at that phrase.

I felt like people were dismissing how hard it was to be home with little children, forcing me to chin up and look to the future. I’m glad to see a book (at least a cover and title) that seem to meet a mother in the midst of the long days rather than nudging her to see the big picture. 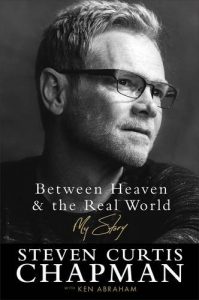 9. Between Heaven and the Real World: My Story by Steven Curtis Chapman with Ken Abraham

His voice was the soundtrack of my young faith — The Great Adventure and Heaven in the Real World are two albums that take me back to early high school. The covers alone bring memories, not to mention the music.

So if Steven Curtis Chapman has a memoir coming out? I will read it. I owe it to early-90s Emily. Don’t let the fire die, y’all. 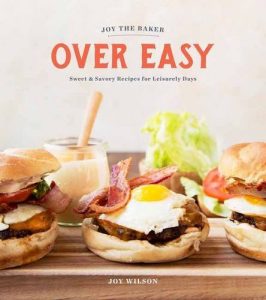 10. Over Easy: Sweet and Savory Recipes for Leisurely Days by Joy Wilson (Joy the Baker)

Why I’m interested: First, because it’s Joy. And second, because I’ve been watching her take photos and test recipes for this book for what seems like ever now on Instagram, so of course I want the finished version.

Hooray for another cookbook by Joy the Baker! And also, it’s brunch-like food so that’s winning.

11. One: Unity in a Divided World by Deidra Riggs 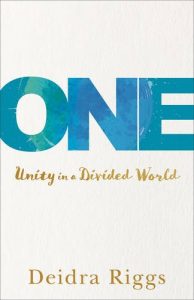 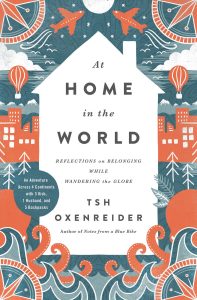 12. At Home in the World: Reflections on Belonging While Wandering the Globe by Tsh Oxenreider

Why I’m interested: This is a book I’ve been anticipating for a long time now. I – along with many of you – followed Tsh and Kyle on their family trip around the world. As she traveled, she took notes and now those notes have become this memoir.

Even if I didn’t know and love Tsh as a friend, the cover and title alone would convince me to read this book. Not to mention the themes of home, belonging, and finding our place. 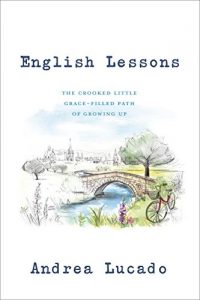 13. English Lessons: The Crooked Little Grace-Filled Path of Growing Up by Andrea Lucado

Why I’m interested: First, it’s memoir and I’m kind of on a memoir kick these days. Second, the author’s dad is Max Lucado and I’m just plain curious about her life as his daughter.

What’s it like to grow up as not only a pastor’s daughter but a bestselling author pastor’s daughter? How does that shape your faith? Also, this cover is so simple and compelling. I want to go to there, don’t you? 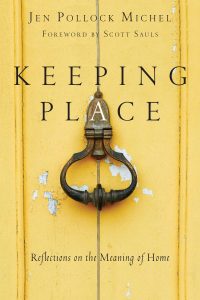 14. Keeping Place: Reflections on the Meaning of Home by Jen Pollock Michel

Why I’m interested: I met Jen Pollock Michel several years ago when we both attended a small group round table on publishing, spiritual formation, and the next generation hosted by IVP and The Dallas Willard Center. Since then, I’ve been meaning to read her award-winning book, Teach Us to Want.

But I will now probably read this one first. Again, the theme of home, of keeping place, and of learning to be where you are is one I can’t (and don’t want) to ignore. 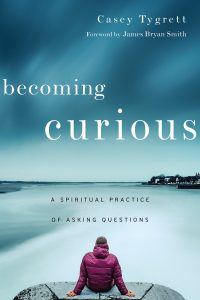 Why I’m interested: One of the most spiritually transformative lessons I’ve learned in the past 5 years is the power of curious questions – both my willingness to ask them of others and my openness to answer them when asked.

I don’t think we, as a culture, know how to listen to each other well. We underestimate the power of a curious question. So when I saw this title and description, I knew it was a book I had to read. 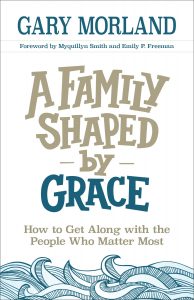 16. A Family Shaped by Grace: How to Get Along With the People Who Matter Most by Gary Morland

Why I’m interested: When it comes to reading books about family or for family, I tend to be drawn less to the how-to experts and more to the humble, faithful, lessons learned by authors who are willing to talk about it. The author of this book is Gary Morland, my very own dad.

If there was ever a more unlikely author of a Christian book about family, I don’t know who it would be – my dad drank too much beer everyday until I was in fourth grade when, suddenly, he stopped. What happened next continues the story of God’s faithfulness in the life of our family and he tells it all in his gentle, instructive, friendly first book.

I’ve read it, I loved it, and I’m writing the forward for it with my sister this very week.

And finally, this last one is out of order (according to it’s release date) but I saved it for last because it’s mine! 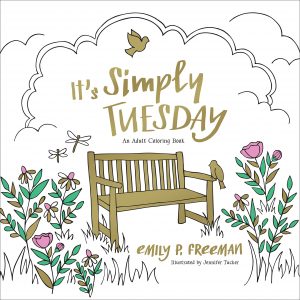 Surprise! We made a coloring book for you!

After sharing our Tuesdays together, first with #itssimplytuesday on Instagram and then with my book Simply Tuesday that released in 2015, we couldn’t resist creating one more little way to slow down. How better to celebrate our smallness than by coloring!

The lovely Jennifer Tucker did the illustrations, the pages are filled with quotes from Simply Tuesday, and it comes out the first week in April.

It’s been a fun, light-hearted project and I think you’re gonna love it. We’ll have more to come on this in the months ahead.

As it turns out, these 17 titles all release by June 2017. I suppose that means I’ll need to craft a second post half-way through the year for late summer and fall releases. What fun!

If you’re a book-lover interested in hearing more about the books I’m reading each month, join over 20,000 fellow readers who receive my monthly letter in their inbox by signing up for free right here. 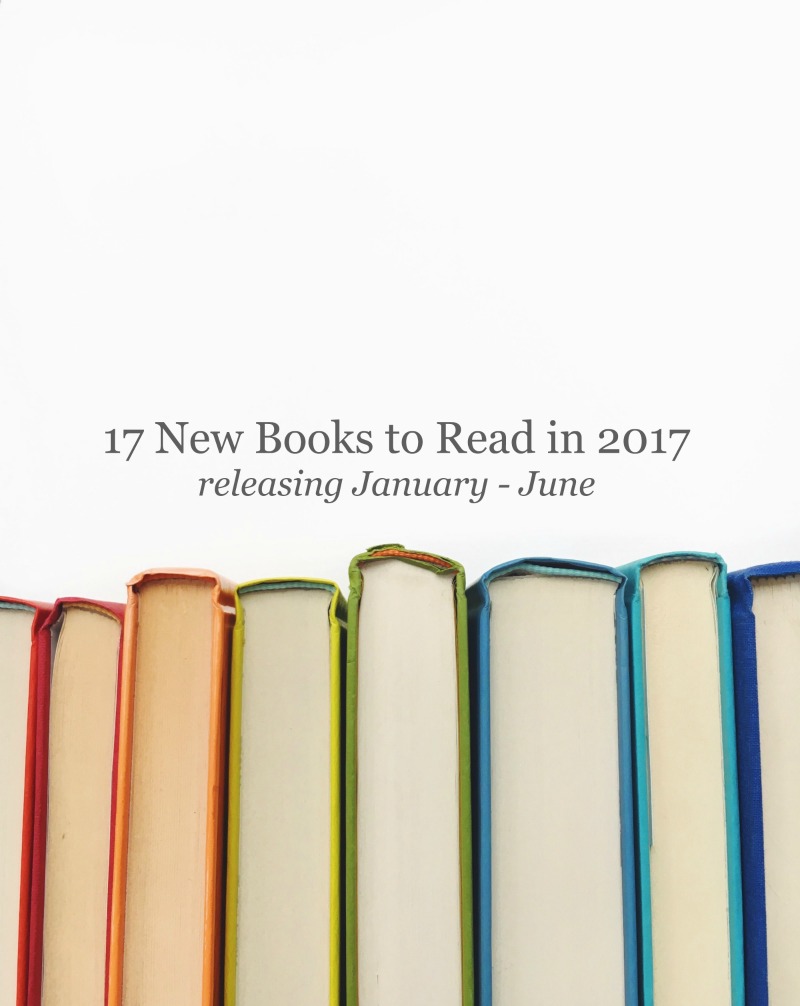